Items related to Arts and Crafts Movement in the Pacific Northwest

Arts and Crafts Movement in the Pacific Northwest 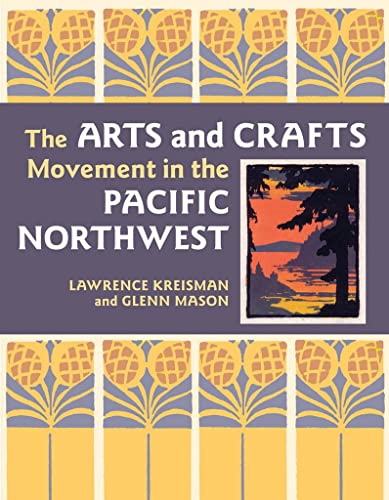 This magnificent compendium is the first comprehensive exploration of the Arts and Crafts legacy in the Pacific Northwest. It traces the movement from its 19th-century English beginnings to its flowering in Washington and Oregon through the 1920s and beyond, weaving into a tale of idealism and devotion everything from iconic masterpieces to recent discoveries. Beautifully illustrated with nearly 400 photographs and period graphics, including rare images published here for the first time, this groundbreaking volume is an authoritative reference, a provocative story, and an irresistible treasure trove for Arts and Crafts collectors and enthusiasts everywhere.

"A comprehensive historic survey. . . . a beautifully designed and illustrated keepsake." --The Seattle Times

"Capturing the Pacific Northwest in its definitive artistic moment, this book is a visual delight." --Western Historical Quarterly

"Not only a delight to view, read, and handle--it also shines a revealing light on the history and the ethos of sustainability of the Pacific Northwest." --Pacific Northwest Quarterly

"Functions not only as an examination of this particular region's interpretation of Arts and Crafts, but also as a tale of how and why the movement so captivated the popular imagination, from the vantage point of those who embraced it most fully." --Old-House Journal

"While Arts and Crafts aficionados will delight in this book as an authoritative resource, general readers also will find value in the social context this volume provides." --Olympia Olympian

"A hefty 398-page reference with hundreds of photographs and period graphics that would appeal to Arts and Crafts aficionados as well as people who love regional history and old homes." --Everett Herald

"[The authors] have restored a particular kind of balance to a story that has elsewhere tended to inflate into a grand narrative of 'ultimate bungalows' and the celebration of $25,000 vases, leaving behind a more modest but vastly more influential tale of changes in the way people lived as an American middle-class culture began to form. They have framed this tale as a regional one, but it can also be read as simply an American one, with more rain and taller trees." --American Bungalow

"Much more than a nostalgic look back in time. It is first and foremost an authoritative reference for the Arts and Crafts movement in Washington and Oregon in the first quarter of the 20th century. It is also a thoughtful and thoroughly enjoyable read and certainly deserves a 'best buy' rating for its cost." --Artist's Magazine

"This readable and handsome work describes and analyzes an important aspect of the art and culture of the Pacific Northwest during the early twentieth century and serves as a valuable reference for further research. Scholars, collectors, and interested lay readers will all enjoy and benefit from reading this book." --Oregon Historical Quarterly

Lawrence Kreisman credits his love of architecture and design to a visit he made with his parents to the Metropolitan Opera House in New York when he was eight years old. New York continued to shape his interest in buildings and design, and after moving to Washington state and receiving his master's degree in architecture, he found a job in the Office of Urban Conservation which set him on the preservation path for life. In successive years, Kreisman worked as a consultant, tour guide, researcher, and author, and served as architectural historian on the Seattle Landmarks Preservation Board from 1995 to 2003. Since 1997, Kreisman has been the program director of Historic Seattle - a membership organization that for 32 years has preserved and restored buildings and encouraged people to get involved in preservation through its advocacy efforts. He is known for bringing public attention to the Northwest's architectural heritage and its preservation through courses, tours, exhibits, lectures, articles and books, and program development. Kreisman's publications include: Apartments by Anhalt, The Stimson Legacy: Architecture in the Urban West, and Made to Last: Historic Preservation in Seattle and King County, as well as hundreds of design features in the Seattle Times Pacific Northwest Magazine. Kreisman holds master's degrees in architecture from the University of Washington, and in English literature from the University of Chicago. His lectures and tours on late nineteenth and early twentieth century design and architecture take place throughout the Pacific Northwest. Glenn Mason, co-owner of Cultural Images, a museum and historical society consulting firm, is an avid enthusiast of the Arts and Crafts movement. While director of the Lane County Museum in Eugene, Oregon, and the Cheney Cowles Museum (now Northwest Museum of Arts and Culture) in Spokane, Washington, he mounted several Arts and Crafts exhibits, researched and spoke on the subject, and helped secure Arts and Crafts collections of regional and national significance.

1. The Arts and Crafts Movement in the Pacific Northwest

2. The Arts and Crafts Movement in the Pacific Northwest

3. The Arts and Crafts Movement in the Pacific Northwest

4. The Arts and Crafts Movement in the Pacific Northwest