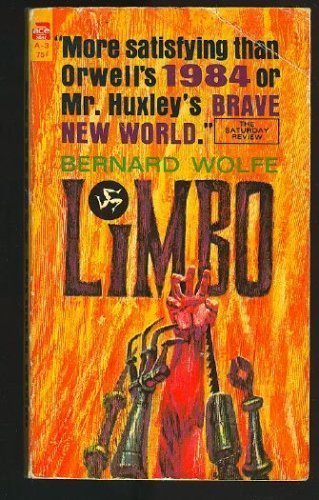 Dr. Martine, a neurosurgeon, flees a limited nuclear war to a forgotten island in the Indian Ocean. After 18 years of performing humane lobotomies on island natives, he sets out to rediscover the world. What he finds is a grotesque post-bomb society in which self-mutilation and installed prosthetic limbs are used to mute the urge to make war. Bernard Wolfe, co-author of Really The Blues, grapples with the largest issues of our century in Limbo.

As to the books of Bernard Wolfe, his extraordinary imagination, his range of styles and genres, should alone qualify him for a conspicuous role in 20th century American literature

To my mind, Bernard Wolfe remains one of the most remarkable original writers of the 20th century

Deep, strange, and wonderful, LIMBO represents a straight arrow pointing from the cautionary dystopias of Orwell and Huxley to the postwar absurdist mode of CATCH-22, Pynchon, and Philip K. Dick

A forgotten classic by one of the great American writers of the twentieth century, with introductions from Harlan Ellison and David Pringle.

Book Description Paperback. Condition: GOOD. Spine creases, wear to binding and pages from reading. May contain limited notes, underlining or highlighting that does affect the text. Possible ex library copy, will have the markings and stickers associated from the library. Accessories such as CD, codes, toys, may not be included. Seller Inventory # 3431971528

Book Description Paperback. Condition: Good. A copy that's been read with wear and creases to the cover and spine. Pages are tanned but clean. Seller Inventory # mon0002795189

Book Description Paperback. Condition: Good. Item is in good condition. Some moderate creases and wear. This item may not come with CDs or additional parts including access codes for textbooks. Might be an ex-library copy and contain writing/highlighting. Photos are stock pictures and not of the actual item. Seller Inventory # DS-088184327X-3