Items related to Goetia: The Lesser Key of Solomon the King

Aleister Crowley Goetia: The Lesser Key of Solomon the King

Goetia: The Lesser Key of Solomon the King 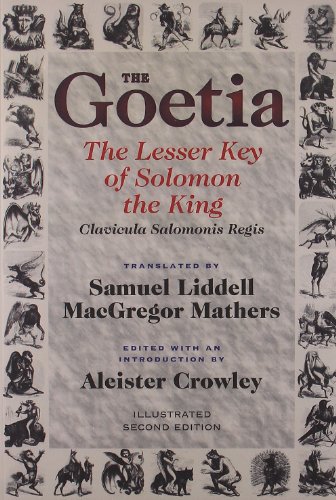 Provides a clear and detailed account of the preparations and precautions necessary for the successful evocation of its 72 spirits, which are described in detail. Includes Crowley's "An Initiated Interpretation of Ceremonial Magic," his version of "The Bornless Ritual," Enochian translations of some of the Goetic invocations, an introduction, and notes. Illustrated. Smythe-sewn and printed on acid-free paper.

Aleister Crowley (1875-1947) was the most widely read author in 20th-century occultism. He single-handedly redefined magic as a field of inquiry and endeavor through his books and the order that he led--the A.A. and the O.T.O. He is the author several books including The Book of the Law, 777 & Other Qabalistic Writings, and The Book of Thoth.
S. L. MacGregor Mathers (18541918) was a prominent scholar and leader of the occult movement in Britian at the turn of the century. A lifelong fascination with mysticism and Celtic symbolism led Mathers to hold high office in the Rosicrucian Society of England, and eventually to become a founder of the Hermetic Order of the Golden Dawn. He is also well known for having been a key tutor to Aleister Crowley.