Items related to Methods, Monarchs and Meanings: Approach to Sociorhetorical... 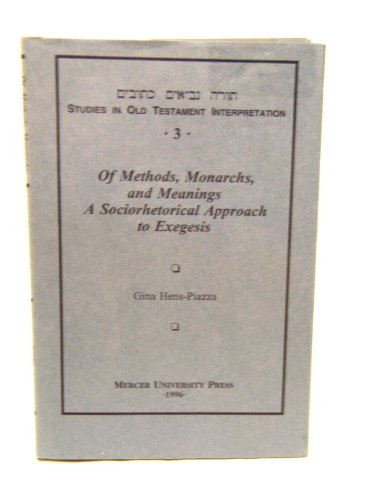 Can rhetorical criticism and social-science criticism collaborate in the interpretation of Old Testament texts? Part one of this study surveys the two methods, defines the profitable points of contact in biblical exegesis, then proposes an integrated methodological approach. Part two illustrates the result through analysis of three familiar texts from the Deuteronomistic History. The work yields a new methodological framework and new readings of three familiar texts.
Part one, the theoretical discussion, responds to current scholarly debate about the merits of methodological specialization and to the need for integrated approaches to exegesis. Part two, the exegetical work, takes up three texts portraying a common social situation, that of a monarch exercising judicial authority: Saul's judgment of Jonathan (1 Sam 14:36-44), David's judgment on behalf of the Tekoite woman (2 Sam 14:1-22), and Solomon's judgment between two rival mothers (1 Kgs 3:16-28). Each analysis demonstrates the interplay of social factors and rhetorical features in the text's rendition of a particular king and a particular kingship, attending both to the character of the king and to the institution of the monarchy. The discussion sets forth the pertinent sociological information as it arises in context. The rhetorical analysis relies on close readings of the Hebrew text accompanied by translation. The resulting exegesis yields insights into the evolution of the monarchy as well as interpretations of the stories.

Gina Hens-Piazza is assistant professor of Old Testament, the Jesuit School of Theology at the Graduate Theological Union, Berkeley.

1. Of Methods, Monarchs, and Meanings: A Sociorhetorical Approach to Exegesis (Studies in Old Testament Interpretation, 3)

2. Of Methods, Monarchs, and Meanings: A Sociorhetorical Approach to Exegesis (Studies in Old Testament