Items related to The Painted House of Maud Lewis: Conserving a Folk... 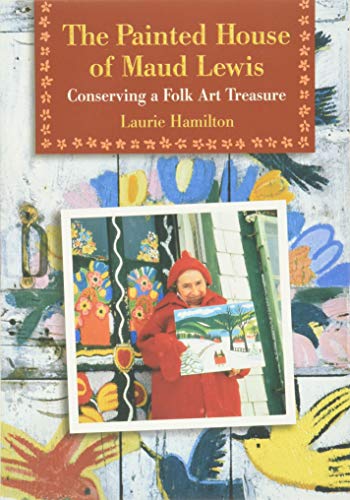 For many years, Maud Lewis was one of Nova Scotia's best-loved folk painters. In the 1990s she was embraced by the rest of the country when the landmark exhibition of her work The Illuminated Life of Maud Lewis travelled across Canada. By the time the tour was over, half a million people had become acquainted with her delightful work. Between 1938, when she married Everett Lewis, until her death in 1970, Maud Lewis lived in a tiny one-room house near Digby, Nova Scotia. Over the years, she painted the doors inside and out, the windowpanes, the walls and cupboards, the wallpaper, the little staircase to the sleeping loft, the woodstove, the breadbox, the dustpan, almost everything her hand touched. Her house was a joy to behold, and it became a magnet for tourists as well as a focal point in her village. In 1979, after Everett Lewis died, the Maud Lewis Painted House Society worked diligently to raise funds to acquire, preserve, and display the house as part of the cultural heritage of the area as well as a memorial to their beloved artist. In 1984, the house and its contents were purchased by the Province of Nova Scotia for the Art Gallery of Nova Scotia. In The Painted House of Maud Lewis, Laurie Hamilton, the conservator at the Art Gallery of Nova Scotia, shows how all the different parts of the house -- the building itself, the painted household items, even the wallpaper -- were catalogued, conserved, and prepared for exhibition. The preliminary stages of conservation treatment began in 1996 in a most unusual location: the Sunnyside Mall in Bedford, just outside Halifax, where conservators worked in full view of the public. The conservators used established techniques and invented new ones to complete their unique project and documented every stage of the restoration photographically. The book also features more than sixty-five colour photos including several taken by noted photographer Bob Brooks in 1965 for the Star Weekly. Today, anyone can visit the tiny house that has become a folk art phenomenon. The restoration story spans two decades, but the story of the Painted House continues as each new visitor to the Art Gallery of Nova Scotia finds delight and inspiration in Maud Lewis's joyous vision.

"This great little book describes the rescue and restoration of folk artist Maud Lewis's truest work of art: her home ... It is Ms Lewis's work in the house that illustrates her unspoiled vision: the extraordinary work executed before the forced labour of commercial pieces took over ... descriptions of the technical processes and applications are successfully balanced by excellent colour photographs." - New Brunswick Reader - 20130115

Rescuing the tiny house of Canada's most beloved folk artist. Maud Lewis painted the whole interior of her tiny one-room house not just the walls, but the doors inside and out, the windowpanes, the breadboxes, the little staircase to the sleeping loft, the woodstove . . . almost everything her hand touched. Her home was a joy to behold.

Fourteen years after Maud's death, the Art Gallery of Nova Scotia acquired the Painted House, famous by then but badly deteriorated. Conservators faced unique challenges as they stabilized and restored this valuable artefact. In 1998, they installed it intact in the custom-designed Scotiabank Maud Lewis Gallery, complete with furnishings, painting materials, and everything else that made up Maud Lewis's diminutive dwelling. "

5. THE PAINTED HOUSE OF MAUD LEWIS: