Items related to In the Footsteps of Jesus and the Apostles

Sizer, Stephen; Arnold, Jon In the Footsteps of Jesus and the Apostles

In the Footsteps of Jesus and the Apostles 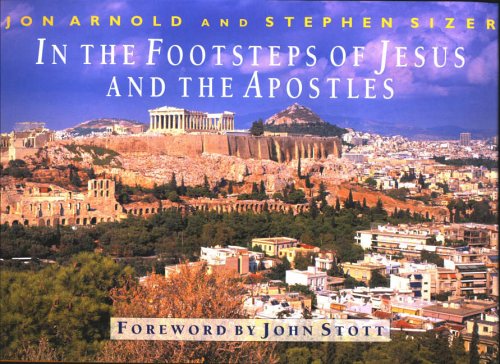 Following the success of Stephen Sizer's first book, A Panorama of the Holy Land, and its sequel, A Panorama of the Bible Lands, I am pleased to see this combined edition. It might well have borrowed the title of a well known 19th Century volume by George Adam Smith entitled, The Historical Geography of the Holy Land, for it is a fine blend of history, geography, biblical allusion and Christian teaching.

Like the ripples caused by a bird landing on water, we are taken on a journey through the Holy Land beginning at Mount Sinai journeying through the Judean Wilderness into the Promised Land. We trace the footsteps of Jesus from his birth in Bethlehem to his ministry in Galilee and then to the cross outside the Walls of Jerusalem. We then follow the Apostles as they are commissioned by the risen Christ and empowered by the Holy Spirit to be his witnesses in the major cities of the Roman Empire including Ephesus, Pergamum, Colosse, Corinth, Athens and Rome.

The text itself is long enough to be satisfying, and yet brief enough to be accessible to the reader. Its contemporary applications are always relevant, and often challenging. It has always been a salutary exercise for the Christian Church in each generation to compare itself with the early Church. Stephen not only draws out the relevant historical and biblical significance of each site but seeks to highlight its contemporary relevance also. We are reminded, as the New Testament proclaims, that we believe in both the historical Jesus who lived and the contemporary Jesus who lives.

Bible students will enjoy looking up its many references. Would-be pilgrims will use it to prepare for their visit. Those who have already been will be helped to re-live their experience. And those who will never have the chance to go will be able through the descriptive text and stunning pictures to imagine the scenes whose names are so familiar. Particularly striking are the double-page, full colour spreads, which occur every few pages and give us spectacular panoramic views.

Luke ends the Acts of the Apostles confidently with Paul preaching, "boldly and without hindrance" symbolising the wide open door for the gospel (Acts 28:31). In that sense it is an unfinished book. Although some of the places described here are no longer known for their living Christian presence owing to persecution, it is our privilege to step into their shoes and to make Christ known in our generation. May this book remind you of our heritage and inspire you to fulfil our high calling.

‘Palestine’, ‘Israel’, the ‘Promised Land’ - the very name we use says as much about us and our presuppositions as about this inscrutable, hypnotic, exotic location.
Historically the birthplace of the Judeo-Christian heritage, it is today claimed by two peoples, the Jews and Palestinians, its holy sites shared, at times uneasily, by three religions, Jewish, Christian and Moslem, often in close proximity as at the Temple Mount in Jerusalem or the tomb of Rachel in Bethlehem.
Barbara Tuchman summarises some of the reasons why this place holds such fascination to so many, ‘More blood has been shed for Palestine than for any other spot on earth. To Protestant England it was not only, as Lord Curzon said, "the holiest space of ground on the face of the globe," the land of the Scriptures, the land of the Crusades, the land "to which all our faces are turned when we are finally laid in our graves in the churchyard." It was also the geographical junction between East and West, the bridge-head between three continents, the focal point in the strategy of empire.’

Few countries attract as much media coverage, arouse such intense religious emotion or political controversy. Yet it has done so for countless generations. Why have people for millennia longed to conquer, live here, or make a pilgrimage to this land? What is the fascination this land has over so many people around the world?

The Holy Land has been described as "the fifth gospel". This book aspires to give you a glimpse into the world of that fifth gospel. Through brief notes and stunning pictures it is designed to inform your mind, stir your heart and deepen your faith. This unique book provides an introduction to the history, geography and biblical significance of over 30 of the most important places that feature in the Bible.
Local Christians like to call it "the Land of the Holy One" for it is here that God has come to dwell with us and make himself known uniquely in the person of Jesus Christ. It was here that heaven and earth, time and eternity met in Jesus Christ. Many testify to having encountered him in a deeper way at one or more of these locations. Whether you have visited the Holy Land many times before or may be contemplating doing so, may this book enhance your faith.
Christianity is first and foremost an historical faith. It is not primarily a philosophy or an ethical code but is based on the space-time intervention by God in human history in the person of Jesus Christ. In this book you are introduced to the most important geographical locations associated with Jesus, from his birth in Bethlehem, through his ministry in Galilee, to his death and resurrection in Jerusalem.
Christianity is also a missionary faith. After his resurrection Jesus Christ sent out his apostles to go into all the world and make disciples, teaching them to obey all he had commanded them. This book takes you on that journey of faith tracing the steps of Paul and the other disciples recorded in the Acts of the Apostles. We witness how the first disciples systematically shared the good news of Jesus Christ in each major town and city of the Roman Empire until they finally reached the capital of Rome itself.
Above all, Christianity is a living faith. Whether you are already a Christian or not, reflect on each location and read the biblical references offered to dig deeper into the Scriptures. See how God has used each place within his providential purposes to reveal his love for you. My prayer is that In the Footsteps of Jesus and the Apostles you may develop a deeper love for the Holy One who was predicted, born, lived, died and rose here, that you might live for ever. But don’t that good news stop with you, pass it on!
Stephen R. Sizer

In the Footsteps of Jesus and the Apostles