Items related to Duplicity and Deception: Policing the Twilight Zone...

Simpson, Alan Duplicity and Deception: Policing the Twilight Zone of the Troubles

Duplicity and Deception: Policing the Twilight Zone of the Troubles 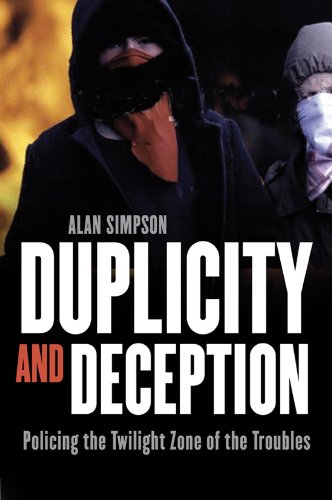 Duplicity and Deception A leading detective reveals the truth behind the headlines of some of Northern Ireland's most violent crimes. Alan Simpson was the senior investigating officer in the case of the controversial killing of Belfast lawyer Pat Finucane. He reveals for the first time the dramatic secrets behind the kidnapping and murder of Thomas Niedermayer, German Consul to Northern Ireland and manager of the Grundig... Full description

Alan Simpson joined the RUC (Royal Ulster Constabulary) in 1970, and at an early stage was accepted into the criminal investigation department. He was involved at the coal face of detective work through most of the Troubles and received many commendations from judges, pathologists and chief constables; he holds a police long service and good conduct medal and the RUC service medal. At the conclusion of his police service he was a detective superintendent and deputy head of the CID for Belfast. He is the author of one previous book, Murder Madness (1999).