Items related to The Horsieman: Memories of a Traveller 1928-1958

Williamson, Duncan The Horsieman: Memories of a Traveller 1928-1958 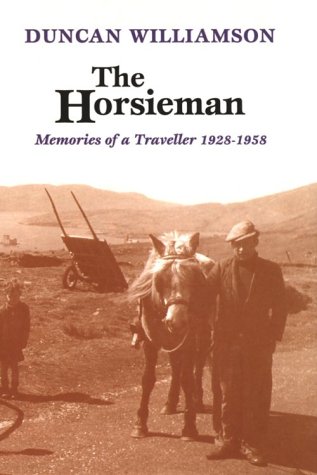 With ten books to his name and countless storytelling visits to far-flung places, Williamson is widely known and much lauded for his storytelling. This autobiography tells of his life's work as a traveller, hawking his wares, collecting stories, and now as an international storyteller, the mouthpiece for his nomadic forbears. Son, grandson and great-grandson of nomadic tin-smiths, basket-makers, pipers and storytellers, Duncan Williamson describes his travelling life. The narrative takes him from a childhood on the shores of Loch Fyne, to work on the small hill farms in summer, walking with barrows and prams, and later with horse and cart the length and breadth of Scotland. He recalls camping with hundreds of traveller families from the 1940s to the 1960s, his marriage to cousin Jeannie Townsley and all the various traditional skills and arts which must be perfected for a man to maintain his family adequately. The narrative, based on 30 hours of taped recordings, tells of the traveller trades, construction of tents, maps of routes travelled, traditional camping sites, stories, songs, music and cures which have been the express knowledge of the travelling people of Scotland, and a keystone in their survival down through the ages. Local legends, traveller's beliefs and customs are all narrated in a perfectly natural context - within the traveller "horseman's" experiences - portraying the character and strength of Scotland's most distinctive race.

Book Description Canongate Press, 1994. Brown Cloth. Condition: Very Good. Dust Jacket Condition: Very Good +. First Edition. 276pp. Although the book is ex-library it is in very good condition and only has the library catalogue number on it. The dustjacket has been protected with a film cover and it is not price-clipped. The book tells the story of a traveller's life and covers the breadth of Scotland. The narrative is based on taped recordings and describes the traveller trades and traditional camping sites, etc. Size: 4to - over 9ľ" - 12" tall. Seller Inventory # 000594