Items related to Power of the Bulleid Light Pacifics: 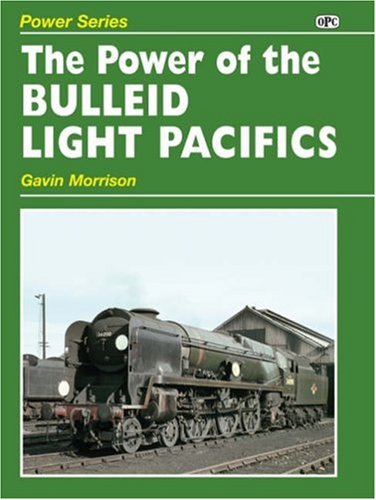 This new title in the ever popular 'Power of' series looks in detail at Bulleid's Light Pacifics, which were designed by Oliver Bulleid as a lighter weight alternative to the 'Merchant Navy' class which, although popular, proved too heavy for the Southern Railway's secondary and branch routes. The class was intended primarily for express and semi-fast passenger trains in Southern England, ranging from the channel ports of South East England to the West Country resorts of South West England. As an extra design challenge for Bulleid, the new class had to be equally adept at both freight workings and branch line stopping trains, both of which required low axle loading, and a good turn of speed. The first of the new locomotives was the 'West Country' class which appeared in 1945. A total of 66 were constructed along with a further 44 designated as the 'Battle of Britain' class, of which the first appeared in 1946.

The locomotives were built at Brighton and Eastleigh - 48 of the class were named after places in the West Country served by its trains or close to its lines, and the rest took their names from RAF Squadrons, airfields, commanders and aircraft that participated in the Battle of Britain over Kent. As with the earlier 'Merchant Navy' class, a programme of rebuilding was instituted by BR in the 1950s although not all of the Light Pacifics were converted before the programme ceased. Of the 110 locomotives built, no fewer than 20 survive in preservation. A major claim to fame of this class was that on 30 January 1965, the un-rebuilt No 34051 Winston Churchill hauled the funeral train of its namesake from London Waterloo to his final resting place, close to Blenheim Palace in Oxfordshire. Written by well respected author Gavin Morrison this new title covers the class in depth with a wealth of illustrations showing them at work from Southern Railway days through post-1948 Nationalisation and into preservation. It is a comprehensive and detailed work of reference for all enthusiasts and railway historians.

Book Description Hardback. Condition: Very Good. The book has been read, but is in excellent condition. Pages are intact and not marred by notes or highlighting. The spine remains undamaged. Seller Inventory # GOR006023832

THE POWER OF THE BULLEID LIGHT PACIFICS

The Power of the Bulleid Light Pacifics (Power Series)

Power of the Bulleid Light Pacifics

Book Description Condition: Very Good. Ships from the UK. Former library book; may include library markings. Used book that is in excellent condition. May show signs of wear or have minor defects. Seller Inventory # 39806363-20

The Power of the Bulleid Light Pacifics