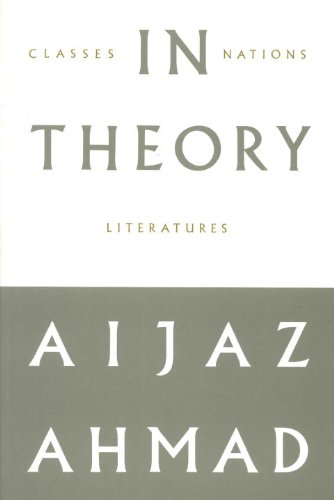 This work provides a critique of the major theoretical statements on colonial discourse and post-colonialism, aiming to dismantle many of the commonplaces and conceits that dominate contemporary cultural theory.

"A sustained and searching polemic... A powerful dissenting voice to the two orthodoxies - 'Third Worldism' and post-structuralism - which have succeeded each other in misrepresenting, as Ahmad convincingly shows, the nature of the many different literatures and cultures flourishing in Africa and Asia. Because of this vigorously argued claim, Ahmad's voice is one of the most important in the current critical debate." - Financial Times "Aijaz Ahmad's In Theory is a brilliant polemic which remorselessly undoes some Western illusions about post-colonial societies. Ahmad examines the historical roots of Western Third-Worldism ... His book is a sharp reminder that there is only one world - that of international capitalism - within which some post-colonial nations have needed to struggle and resist more energetically than others." - Times literary Supplement "In Theory is an erudite and brilliant work - one of the few books in recent years on politics, and literature, which deserves to be taken completely seriously." - The Guardian "Aijaz Ahmad addresses the work of Frederic Jameson, Edward Said and Marx as a theorist of colonialism ... an important and intermittently brilliant book, 'must' redaing for any students of 'world literature'." - Choice