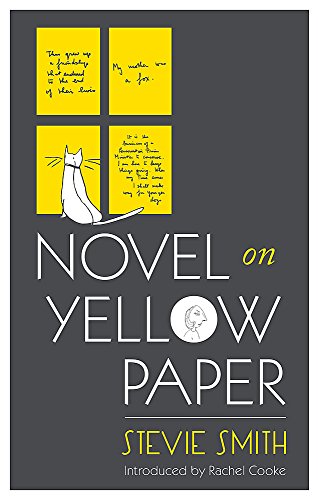 Stevie's alter ego Pompey is young, in love and working as a secretary for the magnificent Sir Phoebus Ullwater. In between making coffee and typing letters for Sir Phoebus, Pompey scribbles down - on yellow office paper - her quirky thoughts. Her flights of imagination take in Euripedes, sex education, Nazi Germany and the Catholic Church, shattering conventions in their wake.

A more individual talent than Stevie Smith's you don't get. An artist of utmost sophistication... Her pre-war Novel on Yellow Paper is an unforgettable work that has nevertheless needed to be rediscovered several times since the day it was first greeted, correctly, as a masterpiece - Clive James, the New Yorker

Virginia Woolf's roving consciousness lies behind the prose in Novel on Yellow Paper, but the tone owes more to Dorothy Parker . . . There are distinct intentions behind Smith's engagingly idiosyncratic manner, and every new reading uncovers further depths. When first published in 1936, it overnight turned Smith into a celebrity. It was swiftly followed by the first two collections of her poetry for which, today, she is better known. But the subversiveness of this novel has never lost its appeal, its greatness lying in its exuberant celebration of the uncircumscribed spirit (Frances Spalding Independent)

Stevie Smith captures, with exquisite stillness and delicacy, all the pains of love (Lee Rourke The Guardian)

The first novel from Stevie Smith, one of the country's favourite poets, was a runaway bestseller on first publication in 1936. It is as original now as it was then.

7. Novel on Yellow Paper, or Work It Out for Yourself