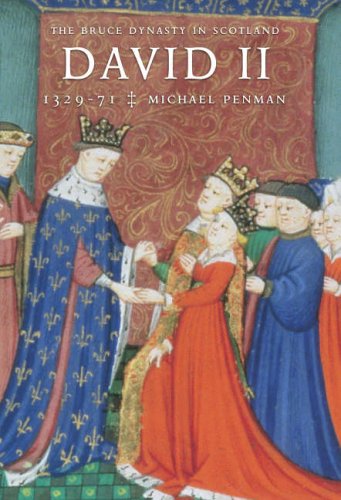 David II (1329-71), son of the hero King of Scots, Robert Bruce (1306-29), has suffered a harsh historical press, condemned as a disastrous general, a womaniser and a sympathiser with Scotland's 'auld enemy', England. Bringing together evidence from Scotland, England and France, Michael Penman offers a different view: that of a child king who survived usurpation, English invasion, exile and eleven years of English captivity after defeat in battle in 1326 to emerge as a formidable ruler of Scotland. Learning from Philip VI of France and Edward III of England in turn, David became the charismatic patron of a vibrant court focused on the arts of chivalry: had he lived longer, Scotland's political landscape and national outlook might have been very different to that which emerged under his successors, the Stewart Kings. But David's was also a reign of internal tensions fuelled by his increasingly desperate efforts to determine the royal succession, overawe great magnates like his heir presumptive, Robert the Steward, and persuade his subjects of the need for closer relations with England after sixty years of war. This is a stirring and revolutionary revision of David II's reputation.

This book has just been awarded the Saltire Society's Scottish History Book of the Year Award for 2004.

Michael Penman is Lecturer in the Department of History, University of Stirling.