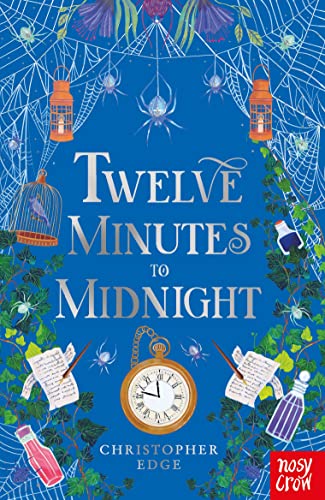 Penelope Tredwell is the feisty thirteen-year-old orphan heiress of the bestselling magazine, The Penny Dreadful. Her masterly tales of the macabre are gripping Victorian Britain, even if no one knows she's the author. One day, a letter she receives from the governor of the notorious Bedlam madhouse plunges her into an adventure more terrifying than anything she has ever imagined.

." . . the descriptions of Victorian London are vivid without being overwhelming, and the storytelling has a direct, focused clip, making this a possible candidate for readers just delving into historical mysteries." The Bulletin of The Center for Children's Books, April 2014

"Edge successfully delivers his own penny dreadful in the riveting style of a Victorian mystery. Original, chilling, atmospheric mystery with a heroine of remarkable mettle." Kirkus Reviews, January 15, 2014

Christopher Edge is an award-winning children's author whose books have been translated into more than twenty languages. Christopher grew up in Manchester where he spent most of his childhood in the local library, dreaming up stories. After studying English at university, he worked in a record shop, mostly listening to Bjoerk, before being led astray by the film Dead Poets Society into a short-lived career as an English teacher. After leaving teaching he worked in publishing in a job that allowed him to read lots of brilliant children's books, and in 2007 went freelance as a publishing and education consultant, working with organisations such as Booktrust and Oxford University Press on resources to inspire children as readers and writers. His novel The Many Worlds of Albie Bright won several children's book awards and was also nominated for the CILIP Carnegie Medal, as was his novel The Jamie Drake Equation, which was also selected as one of the best new children's books of 2017 for Independent Bookshop Week. His latest novel The Infinite Lives of Maisie Day was recently chosen by The Times as their Children's Book of the Week, whilst his other books include the critically-acclaimed Twelve Minutes to Midnight series. He is also the author of How to Write Your Best Story Ever! and How To Be A Young #Writer, inspirational guides to creative writing for children and teenagers. Christopher has appeared at many literary festivals including the Hay Festival, Edinburgh International Book Festival, Emirates Festival of Literature, Cheltenham Literature Festival and was also invited to give the keynote speech at the NATE (National Association for the Teaching of English) conference. He has also authored articles on reading and education for publications such as The Guardian and Teach Primary magazine. Christopher now lives in Gloucestershire with his wife and two children and still spends most of his time in the local library, dreaming up stories.

Book Description Nosy Crow Ltd, United Kingdom, 2012. Paperback. Condition: New. Language: English. Brand new Book. Why are the patients of Bedlam waking every night at twelve minutes to midnight? What is the meaning of the strange messages they write? Who is the Spider Lady of South Kensington?Penelope Tredwell, thirteen-year-old owner of The Penny Dreadful, is always seeking mysteries to fill the pages of her magazine. But this isn't any ordinary story, it's the future.And the future looks deadly. Seller Inventory # AA99780857630506

Book Description Nosy Crow Ltd. Paperback / softback. Condition: New. New copy - Usually dispatched within 4 working days. Penelope Tredwell is the feisty thirteen-year-old orphan heiress of the bestselling magazine, The Penny Dreadful. Her masterly tales of the macabre are gripping Victorian Britain. One day, a letter she receives from the governor of the notorious Bedlam madhouse plunges her into an adventure more terrifying than anything she has ever imagined. Seller Inventory # B9780857630506

Book Description 2012. Paperback. Condition: New. Paperback. Great cities of glass and steel reaching up into the heavens. sinister iron birds peck at the sky.It's 1899. Every night at twelve minutes to midnight the inmates of Bedlam, L.Shipping may be from our Sydney, NSW warehouse or from our UK or US warehouse, depending on stock availability. 256 pages. 0.236. Seller Inventory # 9780857630506