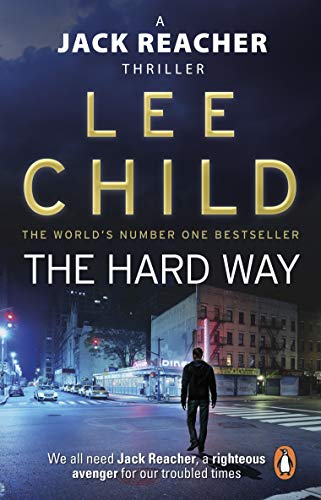 Jack Reacher is alone, the way he likes it.

He watches a man cross a New York street and drive away in a Mercedes. The car contains $1 million of ransom money. Reacher's job is to make sure it all turns out right - money paid, family safely returned.

But Reacher is in the middle of a nasty little war where nothing is simple.

What started on a busy New York street explodes three thousand miles away, in the sleepy English countryside.

Reacher's going to have to do this one the hard way.

The ‘surprise’ factor when reading the thrillers of Lee Child has, it must be admitted, vanished. Most readers who pick up the new book, The Hard Way, will be well aware that this extremely American narrative is, in fact, written by an Englishman. The days when early readers of Child (notably his American fans) would exclaim how amazing it was that Child got all the cultural reference points correct are long gone. And, in a way, that's not a bad thing--now we can judge the novels purely on their own terms. And if The Hard Way doesn't initially appear to be quite as impressive as its predecessors, that's not to say that it isn't a supremely assured piece of work.

Child's durable hero is, of course, ex-soldier Jack Reacher. Child's publishers claim 'men want to be him--women want to have him', and there's no denying that’s a considerable part of Reacher’s appeal. His footloose lifestyle and handy way with the trouble that he’s always encountering are handled by Child with great panache. In some ways, Reacher is the perfect existential hero: he owns nothing or no-one, and he is, in his turn, owned by nothing or no one. He is defined by the actions he undertakes--and that definition only lasts as long as the problem he is involved with. This one has an even wider range than usual, starting on a busy New York thoroughfare and moving to a violent finale across the Atlantic in the sylvan depths of the English countryside, with Jack up against some very dangerous opponents. Interestingly, Child’s publishers describe Jack Reacher in this novel as ‘invincible’, and (ironically) they put their finger on an interesting point in this latest entry. While Jack has always been supremely capable, earlier books have always had a genuine sense of danger--how the hell would Jack get himself out of the latest lethal situation? Here, the outcome seems less in doubt. But this is a minor quibble--Child could not write a bad book if he tried, and all the narrative momentum that propelled the earlier Reacher adventures is satisfyingly in evidence in his latest outing.
--Barry Forshaw

"Reacher, who has long since gained mythical status, is human after all ... This is storytelling of the highest order: lean, laconic, laced with tension" (Evening Standard)

"The invincible Reacher is as irresistible as ever" (Sunday Telegraph)

"Child is a consummate thriller writer: his prose is trim but descriptive, his plots believable, fresh and positively airtight, and shows himself a master of misdirection" (Time Out)

"Lee Child is often mistaken for a US writer, so skilfully and enthusiastically has he embraced the idiom of the American thriller ... One of the genre's finest practitioners" (Independent)

Book Description Transworld Publishers Ltd, United Kingdom, 2011. Paperback. Condition: New. Language: English. Brand new Book. Jack Reacher is alone, the way he likes it.He watches a man cross a New York street and drive away in a Mercedes. The car contains $1 million of ransom money. Reacher's job is to make sure it all turns out right - money paid, family safely returned. But Reacher is in the middle of a nasty little war where nothing is simple.What started on a busy New York street explodes three thousand miles away, in the sleepy English countryside.Reacher's going to have to do this one the hard way._________Although the Jack Reacher novels can be read in any order, The Hard Way is the 10th in the series.And be sure not to miss Reacher's newest adventure, no.26, Better off Dead! ***COMING SOON and AVAILABLE FOR PRE-ORDER NOW***. Seller Inventory # AAZ9780857500137

Book Description Bantam Books (Transworld Publishers a division of, 2011. Paperback. Condition: New. Paperback. Featuring Jack Reacher, hero of the new blockbuster movie starring Tom Cruise, as he comes to the UK.Jack Reacher is alone, the way he likes it.He watches a man cross a New York street and.Shipping may be from multiple locations in the US or from the UK, depending on stock availability. 528 pages. 0.370. Seller Inventory # 9780857500137