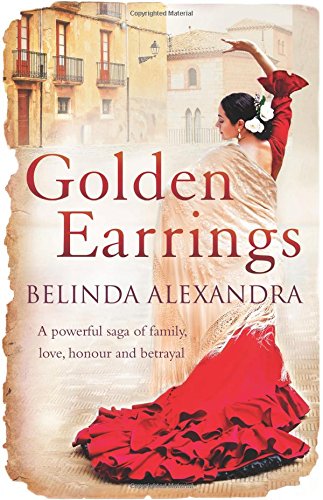 Let me tell you a story...The granddaughter of Spanish refugees, who fled Barcelona after the Civil War, Paloma Batton is an attentive student of the Paris Opera Ballet, that is, until she is visited by a ghost ...Leaving her a mysterious gift - a pair of golden earrings - the ghost disappears, setting Paloma off on a quest. Paloma's exploration of her Spanish heritage, leads to a connection between the visitor and 'la Rusa', a woman who died in Paris in 1952, known for her rapid rise from poverty to flamenco star. Although her death was ruled a suicide, Paloma soon discovers that many people had reasons for wanting la Rusa dead...including Paloma's own grandmother. Golden Earrings travels between Barcelona: before the Civil War, and Paris in the 1970s. It is a story of passion and betrayal, and the extremes two women will go to for love. Nothing is ever quite as it seems...

"Belinda burst onto the scene a few years back with the immensely popular White Gardenia and since then she has released bestseller after bestseller, becoming the number one reading pick for those heading off on a stolen week-end away, for those going on a family holiday, for those curling up on the couch on a wet weekend or for those who just want to bring beauty to their dreary commute to work." (Booktopia)

A powerful saga of family, love, honour and betrayal.

Book Description Paperback. Condition: Very Good. The book has been read, but is in excellent condition. Pages are intact and not marred by notes or highlighting. The spine remains undamaged. Seller Inventory # GOR004561487

Book Description Paperback. Condition: Used; Good. Dispatched, from the UK, within 48 hours of ordering. This book is in good condition but will show signs of previous ownership. Please expect some creasing to the spine and/or minor damage to the cover. Seller Inventory # CHL2141200

Book Description Condition: Good. A+ Customer service! Satisfaction Guaranteed! Book is in Used-Good condition. Pages and cover are clean and intact. Used items may not include supplementary materials such as CDs or access codes. May show signs of minor shelf wear and contain limited notes and highlighting. Seller Inventory # 0857208888-2-4

Book Description Condition: Very Good. This book is in very good condition and will be shipped within 24 hours of ordering. The cover may have some limited signs of wear but the pages are clean, intact and the spine remains undamaged. This book has clearly been well maintained and looked after thus far. Money back guarantee if you are not satisfied. See all our books here, order more than 1 book and get discounted shipping. . Seller Inventory # 7719-9780857208880

Book Description Condition: Very Good. Shipped within 24 hours from our UK warehouse. Clean, undamaged book with no damage to pages and minimal wear to the cover. Spine still tight, in very good condition. Remember if you are not happy, you are covered by our 100% money back guarantee. Seller Inventory # 6545-9780857208880