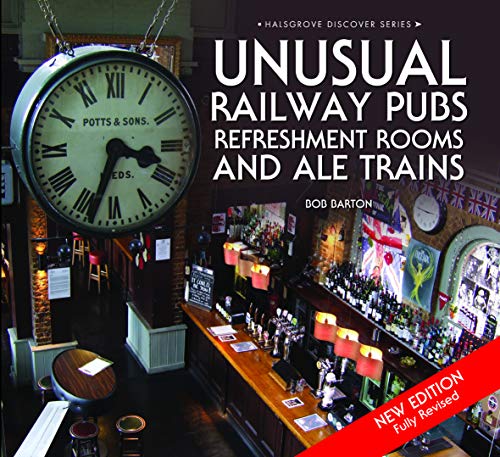 Queen Victoria's private waiting room; the setting for the film classic Brief Encounter; a Lincolnshire signal cabin; a pre-war parcels van; a gas-lit ladies' waiting room; and a wooden carriage of 1876... some of the locations that serve as station pubs with a difference. You can, quite literally, drink in Britain's railway history (and dine too) in the world's first purpose-built railwayman's inn, or the Metropolitan Railway's headquarters, or the terminus of the late lamented Somerset & Dorset Joint Railway. The author, Bob Barton, has spent five years visiting remarkable hostelries where cask ale and coffee is served along with generous portions of railway heritage and now you can too, with the help of this lavishly illustrated guide. Stations both large and small once had licensed refreshment rooms of the type immortalized in Noel Coward's Brief Encounter. During the nineteenth century, a new generation of railway pubs on and adjacent to stations became the successors to coaching inns, for which the railways had sounded the death-knell. Bob Barton traces the 175 year-old relationship between railways, refreshment rooms and the brewing industry through this guide covering everything from main line termini to rural branch line halts. It includes the growing phenomenon of steam hauled Ale Trains on heritage railways, and features reproductions of pump-clips of railway themed beers. The book will appeal to railway enthusiasts as well as both armchair and actual travellers (the places featured can all be visited, most of them by train as well as by car) in addition to real ale lovers and those who like their nostalgia infused with the sight or spirit of steam trains.

Book Description Hardcover. Condition: new. Hardcover. Shipping may be from multiple locations in the US or from the UK, depending on stock availability. Seller Inventory # 9780857043276