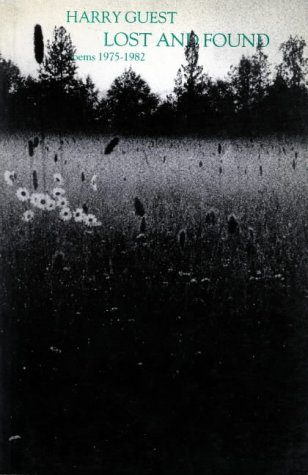 "Lost and Found" contains Harry Guest's work written during 1975-1982. 'At their best Harry Guest's poems are outstanding for their precise imagery and expression of a refinement of sensibility towards atmosphere and emotion', John Cotton wrote in 'Priapus' of his early poems. This is true of the more recent work collected here, which includes poems evoking landscapes and history, poems of love, friendship, 'memory and desire'. "Lost and Found" concludes with the powerful sequence of 'Elegies'; reviewing the Pig Press edition of these in "The TLS", Anne Stevenson wrote, 'They take place in an autumnal English landscape unthreatened by anything worse than natural age and death. The air of loving weariness and fin-de-siecle calm which Guest manages to convey in these meditations reinforces rather than undermines a philosophy of mystical resignation. Somehow everything in the end will be well: 'What the narrow-minded/conceive of as reality is only the first step. We have lived elsewhere".

With Anvil Harry Guest has published three earlier collections of poetry, a short novel 'Days' and a translation of selected poems by Victor Hugo, 'The Distance, The Shadows'. 'A Puzzling Harvest: Collected Poems', published in 2002, marked his 70th birthday. He edited and translated Penguin's 'Post-War Japanese Poetry'. His recent books include a novel 'Lost Pictures' and 'Traveller's Literary Companion to Japan'. He was awarded a Hawthornden Fellowship in 1993, and was appointed Honorary Research Fellow at the University of Exeter in 1994.

Book Description Anvil Press Poetry, Limited, 1201. Condition: Good. 1ST. Former Library book. Shows some signs of wear, and may have some markings on the inside. Seller Inventory # 3575912-6

Book Description Anvil Press Poetry, 1984. Paperback. Condition: Used; Good. Dispatched, from the UK, within 48 hours of ordering. This book is in good condition but will show signs of previous ownership. Please expect some creasing to the spine and/or minor damage to the cover. Inscription on the first page, typically just a name but may include a dedication or a brief personal message. Seller Inventory # CHL5415369

Book Description Paperback. Condition: Very Good. The book has been read, but is in excellent condition. Pages are intact and not marred by notes or highlighting. The spine remains undamaged. Seller Inventory # GOR008865727