Items related to Roman Brooches in Britain: A Technological and Typological...

Bayley, Justine; Butcher, Sarnia Roman Brooches in Britain: A Technological and Typological Study Based on the Richborough Collection: No. 68 (Reports of the Research Committee of the Society of Antiquaries of London)

Roman Brooches in Britain: A Technological and Typological Study Based on the Richborough Collection: No. 68 (Reports of the Research Committee of the Society of Antiquaries of London) 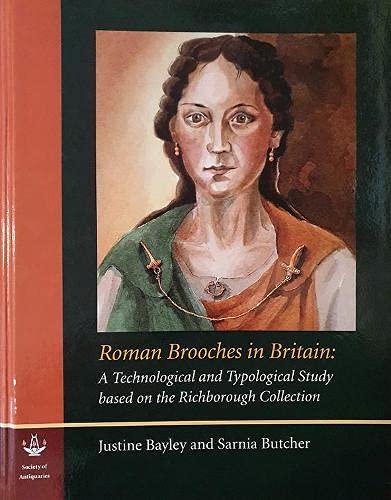 This work presents the first major analysis of brooches from Roman sites in Britain since the pioneering work of M R Hull in the 1950s and 1960s and is the first to study the material using metallurgical analysis in addition to traditional typological methods. Starting with the 445 brooches recovered from Richborough, in Kent, excavated in 1922-38, the authors discovered that, contrary to the general assumption that all ancient copper alloy objects were made of bronze, a range of alloys was employed. Having found significant correlations between brooch type, decoration and alloy properties, they extended their study to include 3,000 additional brooches from other sites in the British Isles - some as yet unpublished. The results presented here amount to an outline of all the main brooch types found in Roman Britain, providing an essential reference corpus combining traditional typological methods of study with the technological evidence, and showing their distribution within Britain via a series of maps. The accompanying CD contains the results of the scientific analyses of the Richborough brooches and selected comparative material, presented in a format that allows readers to browse the data using their own search criteria. The book concludes with a discussion of the use of metallurgical analysis for identifying the geographical location of individual workshops and of the implications for our understanding of the metalworking industry as well as trade and society in Roman Britain.

Justine Bayley has worked as an archaeological scientist for English Heritage and its predecessors since 1973. In 1979 she spent six weeks in Scandinavia on a Churchill Fellowship, studying Dark Ages metal and glass working. She was elected a Fellow of the Society of Antiquaries in 1989 and completed her PhD on non-ferrous metalworking in England from the late Iron Age to the early medieval period in 1992. She is a council member of the Historical Metallurgy Society, edits its journal Historical Metallurgy, acts as secretary to the Association for the History of Glass and is a vice-president of the Royal Archaeological Institute. Sarnia Butcher first became interested in Roman brooches when she excavated the site at Nornour in the Isles of Scilly, where large numbers of them had been found and it was suggested that they were made there. She investigated this hypothesis with the help of the Ancient Monuments Laboratory and her subsequent research provided the genesis of the present work. Now retired, Sarnia Butcher spent her working life as an Inspector of Ancient Monuments with English Heritage and its predecessors. She has published widely, including articles and excavation reports, and has contributed innumerable specialist reports on brooches, which have greatly increased the bibliography on Roman brooches.