Items related to The Inheritors: An Extravagant Story: 8 (Liverpool... 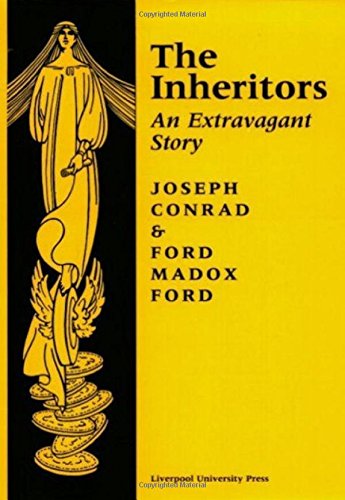 This novel, one of two collaborations between Joseph Conrad and Ford Madox Ford, is one of the earliest to be concerned with modern, mechanical culture, and as such foreshadowed other writers such as George Orwell and Aldous Huxley. Symbolising the collapse of old treasured political values at the turn of the century and underlining the urgency of renovation, the novel involves the unrequited love for a young women of Arthur Granger, an aristocratic and unsuccessful novelist. Granger betrays the ideals on which he prides himself for this woman, a nameless, ethereal and goddess-like agent from a strange world. The collaboration between Joseph Conrad and Ford Madox Ford influenced their own independent work and, in the words of Ezra Pound, `What Flaubert had done to change French prose, Conrad and Ford did to transform English prose.'

Joseph Conrad's science fiction novel written in collaboration with Ford Madox Ford, The Inheritors was conceived as popular fiction but turned out to be one of his least-read novels Towards the end of last year I read the translation of a curious book from Finland: Birdbrain by Johanna Sinisalo. Briefly, the book tells of a hiking trip through the wilds of Tasmania gone weird: a supernatural mystery and a gripping and highly unsettling story, even if occasionally flawed. It's especially good as an account of human frailty in the face of nature's pitiless immensity, the fascination of the abomination, and, the horror. Alert readers might have spotted a hint of Heart Of Darkness in that last sentence - and that's no coincidence. Birdbrain is full of him. There are dozens of direct quotes and yet more allusions, while the whole story can be seen as a retelling of Marlow's jungle misadventure. It's an intriguing experiment - even if the idea of using Conrad as a springboard for a genre story is hardly new. The influence that Heart Of Darkness has had on SF is well known. The scope and extent actually overwhelmed me when I tried to write an article about Birdbrain. I was left asking whether any SF novel written in the past 50 years hadn't been influenced by the novella. But the thing that I didn't realise until I started my research was that not only was Conrad an influence on the genre - he actually wrote an SF book himself. Entitled The Inheritors, and written in collaboration with the almost-as-famous Ford Madox Ford, it concerns a scheme by a group of people from "the Fourth Dimension" to wipe away the current order on earth and set up their own morally dubious hegemony. Sounds interesting, doesn't it? Surprisingly though, the book proved singularly difficult to track down. It's available on Project Gutenberg, but if, like me, you prefer to read from the page you'll have a hard job getting hold of it. After much hunting, I eventually managed to get my hands on an old library copy on abebooks. When it arrived, the stampless ticket on the inside cover told a similarly sad story about the book's popularity. Small wonder I hadn't heard of the thing. The fact that The Inheritors has faded so far is ironic, given the apparent intentions of its authors. Their aim was to increase their profiles and earn a bit of much-needed cash by writing something they hoped would replicate the recent success of HG Wells's The Time Machine. Conrad, in particular had fallen on hard times. Incredible as it seems (especially given that he was also working on Lord Jim and Heart Of Darkness during this period) he was actually contemplating breaking off from writing and returning to the sea. We have The Inheritors to thank for some of the most influential books in the English language, if nothing else. In fact, The Inheritors is fascinating reading for anyone with an interest in Conrad and Ford Madox Ford's careers, especially when you come to quotes such as the telling, "As an author, I had been so uniformly unsuccessful, so absolutely unrecognised, that I had got into regarding myself as ahead of my time, as a worker for posterity." I don't know if that should be attributed to Joseph Conrad, the father of modernism, or Ford Madox Ford, the founder of the Transatlantic Review, but either way the irony is sweet. And any writer will take considerable satisfaction in the way Granger the narrator, himself a failed novelist, rails against the corruption and stupidity in the publishing industry. Some things it seems, don't change. But there are moments that are pure, unchallengeable Conrad: "There were never any noises in the house, only whispers coming from an immense distance - as one who drops stones down an unfathomable well and hears ages afterwards the faintest sound of disturbed waters." And: "He groaned and raved and said things - oh the most astounding things in gibberish that upset one's nerves and everything else." That isn't about Mr Kurtz, although it could be. Sometimes the book seems to contain the offcuts from Heart Of Darkness. But more often there are sharp reflections on Conrad's other works. There's a giant colonial Ponzi scheme based upon the exploitation of labourers in Greenland and shareholders in Europe that drinks from the same poisonous well as Heart of Darkness: King Leopold's scheming in the Congo. Meanwhile, the political intrigues of "the Dimensionists", along with their use of dark propaganda and terror, point forward to masterpieces such as Under Western Eyes and The Secret Agent. What's more, all of that scheming is great fun. The Dimensionists who come "as the grey hairs come, to sap the strength of us as the years sap the strength of the muscles" are a chilling implacable force. There's real tension as they spring their trap. In short, it's fun, even if Conrad and Ford Madox Ford themselves claimed to be dissatisfied with the end result. I wouldn't want to argue with the authors too far; I'll be surprised if a second reading reveals the same depths and ambiguities of Conrad's better works. The book's strangeness and incredibility is alluring, but it also makes it hard to take seriously - as does the fuzziness surrounding the how and whys of the Dimensionists' plans for the earth. While I'm notching up criticisms I should also say there's a passage of gratuitous anti-semitism that does nothing for the reputation of either author. Even so, I remain confused about the fact that such an enjoyable book by two such big names isn't more widely read - or even really in print. Is it genre bias? Is it the fact that collaborations are always such confusing territory for the scholars and teachers who have promoted the authors' individual works over the years? Or - perish the thought - might I be wrong about The Inheritors? * The Guardian *

Buy Used
Condition: Fine
A nice copy of the first edition... Learn more about this copy

1. The Inheritors : An Extravagant Story

2. The Inheritors: An Extravagrant Story

Book Description Liverpool University Press 1998-03-15, 1998. Hardcover. Condition: Fine. Item is in like new condition with minor shelf wear. Might have a remainder mark or slight wear from sitting on the shelf. Seller Inventory # DS-0853235600-1

3. The Inheritors, an Extravagant Story

4. The Inheritors. An Extravagant Story.

Book Description Liverpool University Press, 1998. Hardcover. Condition: Very Good. The Inheritors: An Extravagant Story (Liverpool Science Fiction Texts & Studies) This book is in very good condition and will be shipped within 24 hours of ordering. The cover may have some limited signs of wear but the pages are clean, intact and the spine remains undamaged. This book has clearly been well maintained and looked after thus far. Money back guarantee if you are not satisfied. See all our books here, order more than 1 book and get discounted shipping. . Seller Inventory # 7719-9780853235606