Items related to Coals on Rails, Or the Reason of my Wrighting: 3 (Liverpool...

Hair, P.E.H. Coals on Rails, Or the Reason of my Wrighting: 3 (Liverpool Historical Studies)

Coals on Rails, Or the Reason of my Wrighting: 3 (Liverpool Historical Studies) 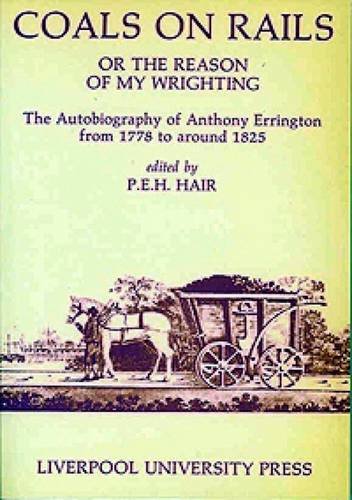 In the 1820s, Anthony Errington, a marginally literate working man, wrote an autobiography covering his life from birth at Felling-on-Tyne in 1788 up to his middle years, and his career from the age of thirteen, working in various Tyneside coalmines as a waggon and waggonway wright. A contemporary of George Stephenson, Anthony Errington was one of the early railwaymen who literally prepared the way for the age of steam locomotion. But his work also took him underground, and he narrowly escaped being one of the victims of the 1812 mining disaster at Felling Colliery. The anecdotes which form the autobiography deal with many curious episodes in his life, both underground and on the surface, and his selection of anecdotes to some extent expresses his faith, as a Roman Catholic, in `Divine Providence'. A general introduction sets the autobiography within its historical and topographical context, and a series of commentaries provides the reader who wishes to explore further with an analysis of several aspects of the autobiography.

Anthony Errington was born in 1778 and died in 1848. He began writing his autobiography in 1823, and the text deals with his life and career up until about 1825. He spent virtually all his life in the lower Tyne valley as a colliery waggon and waggonway wright. This volume contains an introduction, and notes which sketch in the historical context, and explain certain technical points in the text. In addition the editing of the work has modernized the punctuation in order to render it more accessible to modern readers.

1. Coals on Rails, Or the Reason of my Wrighting (Liverpool Historical Studies)