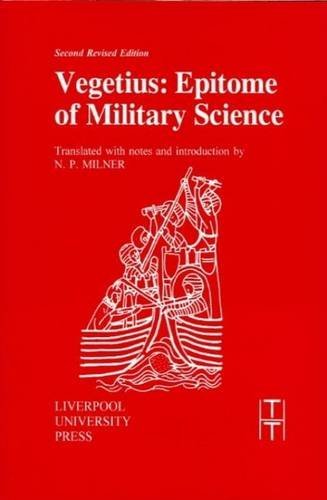 The only Latin Art of War to survive, Vegetius' Epitome wag for long an essential part of the medieval prince's military education. The core of his proposals, the maintenance of a highly-trained professional standing army and navy, was revolutionary for medieval Europe, while his theory of deterrence through strength remains the foundation of modern Western defence policy. This annotated translation highlights the significance for his own age of Vegetius' advice, written just before the fall of the Roman Empire in the West, at a time when economic weakness and political disintegration threatened to undermine the strategic defensive structure that had underpinned the Roman State for so long. The main thrust of his reforms is to confront the problems of the fragmentation of the army, the barbarisation of its personnel, the loss of professional skills, and the substitution of mercenaries for standing forces. The accent of the work is on the practicalities of recruiting and training new model armies (and navies) starting from scratch, and on the strategies appropriate to their use against the barbarian invaders of the period. *N. P. MILNER took a first in Greats at Christ Church, Oxford and later returned to Oxford to research Vegetius for his DPhil. He has also been active in archaeological and epigraphical survey work in SW Turkey.