Items related to A Modern History of the Somali: Nation and State in...

Lewis, I.M. A Modern History of the Somali: Nation and State in the Horn of Africa (Eastern African Studies)

A Modern History of the Somali: Nation and State in the Horn of Africa (Eastern African Studies) 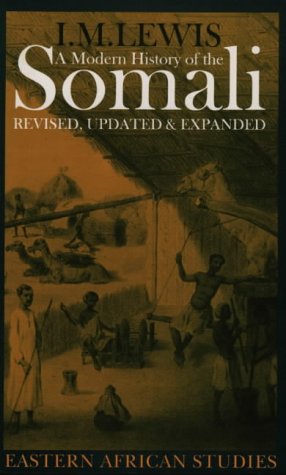 The Fourth Edition of this history shows the amazing continuity of Somali forms of social organisation and the ingenuity with which the Somali way of life has adapted to all forms of modernity.

Lewis writes authoritatively, magisterially and often brilliantly. - Said S. Samatar in AFRICAN STUDIES REVIEW
Somalia's most definitive history updated. - Erving E. Beauregard in AFRICA TODAY
A Modern History remains an authoritative contribution that itself has become a part of Somalia's intellectual history over the years. - Tobias Hagmann in AFRICAN AFFAIRS
Somalia has been consumed by civil war, famine and external intervention. Lewis is vociferous in maintaining his interpretation that these civil wars reflect the underlying divisiveness of the traditional clan system observed by outsiders since the nineteenth century. The Somaliland Republic, comprising the area of the former British Somaliland, seems to be the only ray of hope, and might actually be for some time the only viable Somali state on offer. Let us hope and pray that the suffering of the Somali people may some day be alleviated. - James Quirin in JOURNAL OF AFRICAN HISTORY
... updated version of his classic text...Throughout the text, Lewis portrays the ingeniousness with which the Somali way of life has been adapted to all forms of modernity. REFERENCE & RESEARCH BOOK NEWS
A Modern History of the Somali is an excellent account of the political history of the Somali peoples. It should command the respect and interest of the worlds of academia, policy, development workers, and an attentive and curious public. This fourth edition is Lewis's ultimate commentary on the possibility of reshaping Somali political history. - Mohamed A. Salih in MODERN AFRICAN STUDIES
Cette analyse partisane de l'histoire de la Somalie, eclairee par une bonne maitrise du terrain et des societes somaliennes, reste d'un grand interet pour un large public et pour les specialistes. - Colette Dubois in OUTRE-MERS
A remarkable book for it remains after four editions - 1965, 1980, 1998 and 2002 - essential introductory reading for all who would learn of the Horn of Africa. ...[The] additional chapters are all original and they vividly portray more recent events against a background of the remarkable resilience of Somali cultural values. ...the facts are well marshalled and the reader is left in no doubt that in their interpretation the author draws heavily on an unequalled lifetime of anthropological and political analyses of the structure of traditional Somali life and society. - Richard Greenfield in OVERSEAS PENSIONER

This text covers topics such as: before partition; the imperial partition - 1860-97; the dervish fight for freedom - 1900-20; Somali unification - the Italian East African empire; from trusteeship to independence - 1950-60; the problems of independence; the Somali revolution - 1969-76.

1. A Modern History of the Somali: Nation and State in the Horn of Africa (Eastern African Studies)

2. A Modern History of the Somali: Nation and State in the Horn of Africa (Eastern African Studies) [Paperback] Lewis, I.M.

3. A MODERN HISTORY OF THE SOMALI: