The Flower Class Corvette "Agassiz" (Anatomy of the Ship) 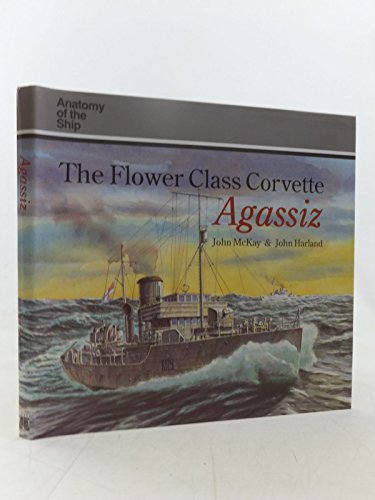 The Flower class corvette was one of the most famous and numerous of all escort vessels, and the corvette 'Agassiz' is the most representative of the Canadian Flowers, which were thrown into the thick of the bitter Atlantic convoy battles of 1941--2. Derived from a whalecatcher hull design, and intended as a cheap coastal escort that could be built by non-specialist yards, the Flowers were the only class available in large numbers when the submarine war flared up in earnest in 1941. As a result they were used on rigorous ocean convoy duties for which they were barely adequate, and their crews suffered greatly in one of the harshest arenas of the second world war. This is a superb description of the ship and her career. The 'Anatomy of the Ship' series aims to provide the finest documentation of individual ships and ship types ever published. What makes the series unique is a complete set of superbly executed line drawings, both the conventional type of plan as well as explanatory views, with fully descriptive keys. These are supported by technical details and a record of the ship's service history.

John McKay is an architectural draughtsman by profession, and this training undoubtedly helped with the production of a series of techical drawings for three volumes in Conway's Anatomy of the Ship series; on the Victory, the frigate Pandora and the armed transport Bounty. His book on the Victory took nearly five years to complete and involved more than 3,000 hours of work, but resulted in what remains perhaps the most comprehensive documentation of the ship to date. John lives near Vancouver, Canada.

1. The Flower Class Corvette Agassiz (Anatomy of the Ship)

Book Description Conway Maritime Press Ltd, 1993. Hardcover. Condition: Very Good. Very Good: a copy that has been read, but is in excellent condition. Pages are intact and not marred by notes or highlighting. The spine remains undamaged. Most items will be dispatched the same or the next working day. Seller Inventory # wbb0015262892

2. The Flower Class Corvette Agassiz (Anatomy of the Ship)

Book Description Chrysalis Books, 1993. Condition: Good. A+ Customer service! Satisfaction Guaranteed! Book is in Used-Good condition. Pages and cover are clean and intact. Used items may not include supplementary materials such as CDs or access codes. May show signs of minor shelf wear and contain limited notes and highlighting. Seller Inventory # 0851776140-2-4