Items related to Who needs theology?: Invitation To The Study Of God

Stanley J. Grenz And Roger E. Olson Who needs theology?: Invitation To The Study Of God

Who needs theology?: Invitation To The Study Of God 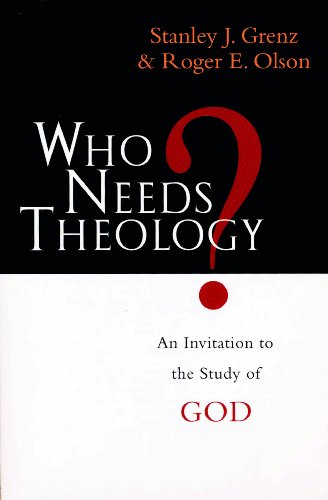 An appeal for lay people, students and ministers to engage in theological reflection, with advice provided.

Easily acceptable to the lay-people within the church, while at the same time retaining enough critical thought and depth that seminary students and pastors would still appreciate the work that has gone into this book.--Nathan W. Bingham, Calvinist (cal.vini.st), May 4, 2009

Ordained into the gospel ministry in 1976, Grenz worked within the local church context as a youth director and assistant pastor (Northwest Baptist Church, Denver), pastor (Rowandale Baptist Church, Winnipeg), and interim pastor. In addition he preached and lectured in numerous churches, colleges, universities and seminaries in North America, Europe, Africa, Australia and Asia Grenz wrote or cowrote twenty-five books, the most recent of which isRediscovering the Triune God: The Trinity in Contemporary Theology (2004). His other books include The Social God and the Relational Self: A Trinitarian Theology of the Imago Dei (Westminster John Knox), Beyond Foundationalism: Shaping Theology in a Postmodern Context (with John R. Franke; Westminster John Knox), The Moral Quest: Foundations of Christian Ethics (IVP), A Primer on Postmodernism (Eerdmans), Women in the Church: A Biblical Theology of Women in Ministry (with Denise Muir Kjesbo; IVP), Revisioning Evangelical Theology: A Fresh Agenda for the 21st Century (IVP), and The Millennial Maze: Sorting Out Evangelical Options (IVP). He has also coauthored several shorter reference and introductory books for IVP, including Who Needs Theology? An Invitation to the Study of God (with Roger E. Olson), Pocket Dictionary of Ethics (with Jay T. Smith), and Pocket Dictionary of Theological Terms (with David Guretzki and Cherith Fee Nordling). He contributed articles to more than two dozen other volumes, and has had published more than one hundred essays and eighty book reviews. These have appeared in journals such as Christianity Today, The Christian Century, Christian Scholar's Review, Theology Today and the Journal of Ecumenical Studies. For twelve years (1990-2002), Grenz held the position of Pioneer McDonald Professor of Baptist Heritage, Theology and Ethics at Carey Theological College and at Regent College in Vancouver, British Columbia. After a one-year sojourn as Distinguished Professor of Theology at Baylor University and Truett Seminary in Waco, Texas (2002-2003), he returned to Carey and resumed his duties as Pioneer McDonald Professor of Theology. In 2004 he assumed an additional appointment as Professor of Theological Studies at Mars Hill Graduate School in Seattle, Washington.

1. Who Needs Theology?: Invitation to the Study of God (Paperback)

4. Who Needs Theology?: Invitation to the Study of God

6. WHO NEEDS THEOLOGY? An Invitation To The Study Of God

7. Who Needs Theology?: Invitation to the Study of God

8. WHO NEEDS THEOLOGY? An Invitation To The Study Of God