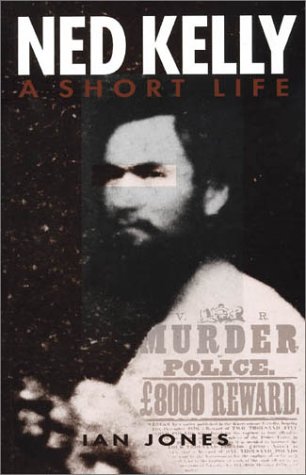 Every nation has a lovable bandit/rebel/folk hero in the mould of Robin Hood and Rob Roy. But Ned Kelly is an uncomfortable hero - he killed policemen, robbed banks, stole horses from squatters...But he became a champion of the rural underclass and an enemy of arrogant officialdom.
Ned Kelly was of Irish stock - to some, he embodied the splendid rebel spirit of the Irish, to others he was the awful example of what the Irish Australian was capable of in opposition to British law.
Ned Kelly became increasingly prominent in Australia's artistic life - in paintings, literature, poetry, drama, music and film - and the Kelly legend lives on.

The best Kelly biography by a country mile (Bruce Gaunson, The Australian)

It will probably stand as the definitive account of Kelly's life and its meaning...a work of prodigious scholarship, vivid reportage and sharp analysis...the most detailed portrait of the outlaw ever written. (Rod Moran, West Australian)

Book Description Lothian, 1996. Paperback. Condition: Very Good. The book has been read, but is in excellent condition. Pages are intact and not marred by notes or highlighting. The spine remains undamaged. Seller Inventory # GOR001217362

Book Description Lothian, 1996. Paperback. Condition: Good. The book has been read but remains in clean condition. All pages are intact and the cover is intact. Some minor wear to the spine. Seller Inventory # GOR002029520

Book Description Lothian Books, 1996. Paperback. Condition: Very Good. Very Good: a copy that has been read, but is in excellent condition. Pages are intact and not marred by notes or highlighting. The spine remains undamaged. Most items will be dispatched the same or the next working day. Seller Inventory # wbb0015581622

Book Description Lothian Books, 1995. Condition: Near Fine. A new edition of the definitive biography of Ned Kelly. In Jone's biography, Kelly emerges as a man - a man who hated conflict but never escaped it. A private man incapable of being ordinary and unnoticed. Seen, even in his own lifetime, as what he represented rather than what he was. 'The best Kelly biography by a country mile' - The AustralianThe definitive biography of Ned Kelly - and a superb description of his times.Ian Jones combines years of research into all the records of the era and exhaustive interviews with living descendants of those involved, to present a vivid and gripping account of one of Australia's most iconic figures.`It will probably stand as the definitive account of Kelly?s life and its meaning?a work of prodigious scholarship, vivid reportage and sharp analysi. The most detailed portrait of the outlaw ever written?.- Rod Moran, West Australian #0115/0220/0221 pp. x, 404 First Edition Illusts Bushranger ISBN 10: 0850916313 ISBN 13: 9780850916317 Elizabeth's Bookshops have been one of Australia's premier independent book dealers since 1973. Elizabeth's family-owned business operates four branches in Perth CBD, Fremantle (WA), and Newtown (NSW). All orders are dispatched within 24 hours from our Fremantle Warehouse. All items can be viewed at Elizabeth's Bookshop Warehouse, 23 Queen Victoria Street, Fremantle WA. Seller Inventory # 9673