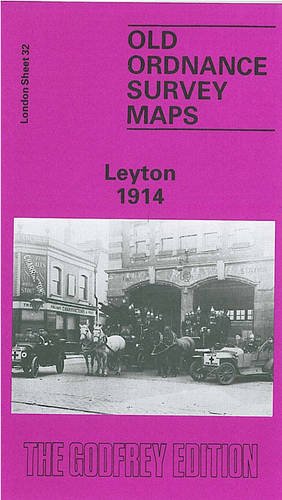 Here are the details of maps for Leyton: London Sheet 32.1 Leyton 1863-67 - published 2007; intro by Alan Godfrey. ISBN.978-1-84784-021-9 London Sheet 32.2 Leyton 1894 - published 1985; intro by Jonathan Evans. ISBN.978-0-85054-032-1 London Sheet 32.3 Leyton 1914 - published 1992; intro by Isobel Watson. ISBN.978-0-85054-032-1 We have published three versions of this map, showing how the area developed across the years. The maps each cover the same area, from Templemill Sidings eastward to Woodhouse Road and Newcomen Road, and from Carlisle Road and St Mary's church southward to Crownfield Road. St Patricks RC cemetery is in the centre of the map and other features include the massive West Ham Union Workhouse, opened in 1840; GER wagonworks, Leyton Isolation Hospital, Ruckholt Farm, tramways and tram works, GER Epping line with Leyton station, Tottenham & Forest Gate line with Leytonstone station, Harrow Green, Holy Trinity church. The principal roads running north-south through the map are Leyton Road and High Road. Leyton itself is to the top of the map, while in the SE corner is Wanstead Slip, with Jews Cemetery. Obviously some of the later features do not appear on the earliest map. The area saw enormous changes over the years. The first map shows an almost entirely rural village, with development only just begun and Leyton station standing among fields; by 1914 the area was largely built on. The population of Leyton in 1861 was just 4,794; by 1921 it had risen to 128,430. These three maps give a vivid portrait of how Leyton developed over the years.