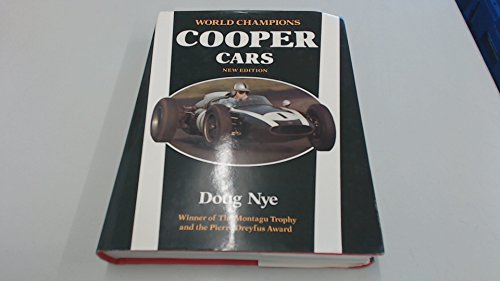 No stone was left unturned in researching this book. This incredibly comprehensive work includes many items from John Cooper's personal records and photo albums, the company's chassis books, as well as 300-plus black-and-white photos and 16 color images. Further unique archival material comes from many of those involved in building the cars and the cars' subsequent owners. Unquestionably regarded as the benchmark work on Cooper, the cars so significant in the development of postwar racing car design.Originally published in 1983 ISBN 1-85532-919-0 Winner of the Montagu Trophy and the Pierre Dreyfus Award

The Mini Cooper is one of the most enduring symbols of the 1960s, but before his vehicles became fashionable, John Cooper had dominated Formula 1 racing and inspired many motor sport greats. Nye looks at the humble origins of the family company that became Cooper cars.

Book Description Osprey 1991, 1991. Hardbound. Condition: Fine(1). New Edition. A wealth of information on this automobile. With d/j. Previous owner stamp on inside page. One copy published 1999. Illustrated by: . Seller Inventory # AM9454

Book Description Osprey Publishing Limited, United Kingdom, 1991. Hard Cover. Condition: Very Good. Dust Jacket Condition: Very Good. Third Edition. In this book are 26 chapters plus appendices which encompass some 300-plus black and white photographs, 16 colour, and close to 150,000 words. No stone is left unturned. Perhaps the biggest scoop was the loan of John Cooper's personal records, and photographic albums plus the company's chassis books, Further unique archive material came from many of those involved in building the cars and from a string of subsequent owners. Light edgewear to jacket. Size: 376 Pages. Seller Inventory # 013706

Book Description Motorbooks International ( MBI ), 1987. Hardcover. Condition: Near Fine. Dust Jacket Condition: Near Fine. 2nd Edition. The signed complete history of the race cars that were built by the Cooper Car Company in England. This book is titled: "Cooper Cars - World Champions " by Doug Nye. This hardbound book has 376 pages, with color (colour) and over 300 B&W photos. *Please note: this book is special in that it was signed on the half-title page by John Cooper, the designer and builder of these fabulous Formula 1 winning cars. Included are production details, and specifications, for all the Cooper race cars that were built from 1946 on! Appendix in the back of the book list: "Cooper Chassis Records" by year, detailed " Racing Records " from 1952 through 1969 , and. " Mini Cooper serial number coding ". In 1959, and 1960, Jack Brabham drove Cooper F1 Cars to successfully to twice win the Formula One ( F1 ) World Drivers', and Manufacturers' Championships. This is the Second Edition that was published in 1987 by Osprey Publishing Limited and Motorbooks International ( MBI ). This book, and original non-price clipped dust jacket, are in nice Near Fine condition with only light age toning. Signed by Author(s). Seller Inventory # 000007