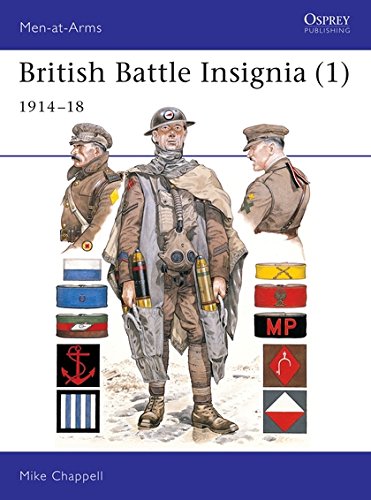 The British soldiers who marched off to war in 1914 wore only regimental insignia, yet by the time of the armistice in November 1918, insignia in the British Army had undergone a considerable change. Now visible was a bewildering display of coloured devices on uniforms, helmets, vehicles, guns, signboards and flags. Regimental badges remained but were joined by divisional insignia. These were rarely seen in the front line. Instead the 'battle patch' had appeared for combat use. In this beautifully illustrated book Mike Chappell looks at the colourful variety of insignia used by the British Army during the Great War.

Mike Chappell comes from an Aldershot family with British Army connections stretching back several generations. He enlisted as a teenage private in the Royal Hampshire Regiment in 1952. Over the next 22 years of infantry soldiering, many of them spent with the Gloucester Regiment, he held every rank and many regimental appointments up to WO1 and Regimental Sergeant Major. he retired in 1974, as RSM of the 1st Battalion The Wessex Regiment (Rifle Volunteers), after seeing service in Malaya, Cyprus, Swaziland, Libya, Germany, Ulster and home garrisons. He began painting military subjects in 1968 and since then has gained worldwide popularity as a military illustrator. Mike has also written and illustrated many books for Osprey.