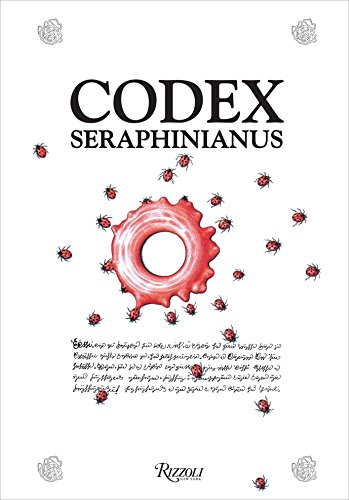 Ever since the Codex Seraphinianus was first published in 1981, the book has been recognized as one of the strangest and most beautiful art books ever made. This visual encyclopedia of an unknown world written in an unknown language has fueled much debate over its meaning. Written for the "information age" addressing the import of coding and decoding in genetics, literary criticism and computer science, the Codex confused, fascinated and enchanted a generation.

While its message may be unclear its appeal is obvious. It is a most exquisite artifact. Blurring the distinction between art book and art object, this 33rd anniversary edition--redesigned by the author and featuring new illustrations--presents this unique work in a new unparalleled light. With the advent of new media and forms of communication the Codex is now more relevant than ever.  The continuous stream of information and how it is processed is very much a part of our lives and what makes this extraordinary book so timely and sought after by so many.

"...the book really does live up to its reputation: The drawings are in turn hilarious, disturbing, bizarre and, sometimes, just flat-out incomprehensible, but all of them are annotated in Serafini's script." -Dangerous Minds

"It's not the sort of thing that easily lends itself to classification, but probably the most accurate way to describe it would be as an encyclopedia of an invented alien civilization...the Codex is still a disorienting and provocative vision of inscrutable otherness." -Slate.com

"Codex Seraphinianus is an art book in the most direct sense--there are big, beautiful drawings accompanied by indecipherable letterforms--and it is impossible to "read" in a literal way. The text has remained a mystery all these years, and perhaps that's part of its draw as an art object." -FineBooks Magazine

"Is the best art book of the year one that is not only impossible for me to review, but one that is probably equally impossible for you to understand? It's a handsome, hilarious and enduring puzzle that not only features wonderful art in it, but in its entirety captures another kind of human creativity--the encyclopedia, the result of compiling and collecting, and an unlikely medium for artists." -North Adams Transcript

"Codex Seraphinianus History's Most Bizarre and Beautiful Encyclopedia, Brought Back to Life...a weird and wonderful masterpiece of art and philosophical provocation on the precipice of the information age....Undoubtedly one of the most intricate and beautiful art books ever created." -Brain Pickings "Wow. One of the strangest and most beautiful books ever published." -Faerie Tales

"Codex Seraphinianus is in a sense the most elaborate book of doodles ever made. What makes it much more than that is not just the quality of Serafini's drawings and the superior book-making craft, but its brilliant structure. Part of the genius of the Codex is that there is enough information to be familiar but not enough to make any sense." -Spectrum Culture

"The intense strangeness of Codex Seraphinianus belies the joyous feel of the artistry. Even the oddest, most unnerving images are rendered with pastel beauty, and a softness that makes them almost endearing." -KQED About the Author:

Luigi Serafini is an architect, ceramist, glazier, painter, sculptor, designer, opera director, set designer, and critic who works in Italy and abroad. In 2007, the Padiglione d'Arte Contemporanea in Milan dedicated a successful mostra ontological (ontological exhibition) to him. He has illustrated works by Franz Kafka and Michael Ende.