Items related to Moral Theory: An Introduction (Elements of Philosophy) 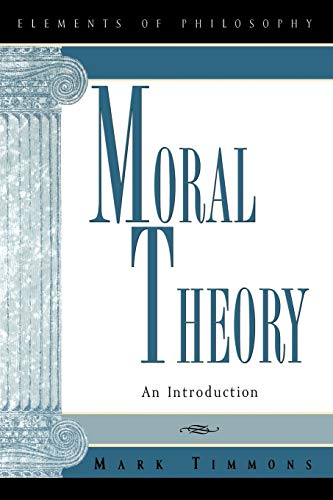 I will be adopting Mark Timmons's Moral Theory. Moral Theory is an outstanding book for my course in ethical theory.--Ted A. Warfield, Notre Dame

It is hard to imagine how anyone could write a better survey of normative moral theory than does Mark Timmons in Moral Theory: An Introduction.--Brad Hooker, University of Reading (UK)

Mark Timmons has produced a first-rate introduction to moral philosophy. He manages to present a very broad range of material in an exceptionally clear and fair-minded way. He has covered all of the important bases, and done so by incorporating reference to the best of the recent literature in the areas he has covered. The many topical examples and accessible style make this an ideal source for students who want a rigorous introduction to the central philosophical issues concerning right and wrong.--Russ Shafer-Landau, University of Kansas

Mark Timmons's Moral Theory: An Introduction is a first-rate critical overview of nine important approaches to moral theory. It is remarkably clear and accessible to undergraduates with no prior experience of philosophy and sufficiently deep to be of use to graduate students preparing for a comprehensive exam in ethics. The author's assessment of the strengths and weaknesses of the theories is insightful and scrupulously fair.--William Tolhurst, Northern Illinois University

A fine and reliable text in this area of philosophy.--Rev. Professor Blaine O'Connor, Department of Philosophy, Los Angeles Mission College

Moral Theory is one of my favorite texts for undergraduates. The usual Kantian and Utilitarian material is exceptionally well done, especially splitting the latter into classical and contemporary theories. And the treatment of such other theories as Divine Command, Natural Law, Moral Pluralism and Particularism is something one rarely gets in other texts with such depth and yet readability, if at all.--Robert Kane, University of Texas at Austin

" I believe that it is the best introduction to normative ethics available. Part of what makes the book so good is that it focuses on normative ethics, letting meta-ethical questions come in only as necessary. Many of the existing introductions to moral theory don't make the distinctions clear enough this is the text I've been looking for! My students enjoyed it as well."--Mark Decker, Department of Philosophy, University of Nebraska"

Finally! I've been waiting for an introduction to ethical theory that my students and I would love one that is interesting and well-written, but is also accurate and insightful, and models good philosophy. Mark Timmons's Moral Theory: An Introduction is all this and more. Not only is Timmons's treatment as a whole rich, clear, and illuminating, but I consider the individual chapters themselves to be among the best stand-alone treatments of their particular subject matters available. Timmons covers a particularly wide range of topics, including significant accounts of Divine Command Theory, Natural Law theory, and moral particularism, and he is remarkably thorough and fair in his treatment of each position. I have gained new appreciation and respect for several moral theories through reading this book. I strongly recommend it as an introductory text for undergraduates, but, because of its scope, clarity, and accuracy, it is an excellent resource for 'seasoned veterans' of ethical theory as well.--David Horner, Talbot Department of Philosophy, Biola University"

Mark Timmons is professor of philosophy at the University of Memphis and author of Morality without Foundations (Oxford, 1999). He has published extensively in the areas of ethics and moral theory.