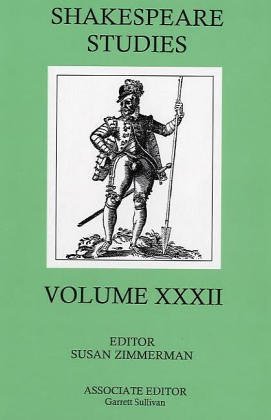 Shakespeare Studies is an international volume published every year in hard cover, containing essays and studies by critics and cultural historians from both hemispheres. It includes substantial reviews of significant books and essays dealing with the cultural history of early modern England, as well as the place of Shakespeare's productions - and those of his contemporaries - within it. Volume XXXII continues the second in a series of essays on ""Early Modern Drama around the World"" in which specialists in theatrical traditions from around the globe during the time of Shakespeare discuss the state of scholarly study in their respective areas. Here, Mitsuru Kamachi discusses aspects of Japanese theater, while Stephanie O'Hara reviews work relevant to the theater of early modern France. Volume XXXII also includes another in the journal's series of Forums, entitled ""The Future of Renaissance Manuscript Studies."" Organized and introduced by Peter Beal, the Forum includes contributions by Margaret J. M. Ezell, Grace Ioppolo, Harold Love, and Steven W. May. Additionally, this volume contains seven full-length articles and twenty-two book reviews. Leeds Barroll is a Scholar in Residence at the Folger Shakespeare Library,