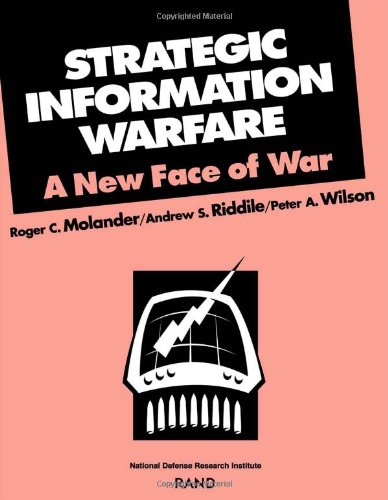 Strategic Information Warfare reports on the findings of an exercise-based analysis of the information warfare problem. The RAND team was joined in this study effort by senior exercise participants from the national security community and the information system and telecommunications industries. Multiple groups of participants went through a series of CyberWar exercises based on a methodology known as "The Day After..." - which was originally developed by RAND to explore a variety of emerging nuclear proliferation threats and related counterproliferation issues.
Using this same methodology, the authors identify the defining features of strategic information warfare, discuss the implications for strategic defense, and recommend a set of potential initiatives to minimize the likelihood of a cyberspace warfare crisis. Strategic information warfare is a very new concept. It is the emerging face of CyberWar - a phenomenon that once was largely hypothetical.

Reviews of STRATEGIC INFORMATION WARFARE
"Information warfare remains a nebulous subject, but his monograph offers one of the most interesting and revealing ways of thinking about it, at least in an unclassified venue. A short but comprehensive discussion of the central issues in information warfare, particularly defense against attacks on the myriad information systems that keep American society running, is followed by an ingenious 'day after' exercise that illustrates and amplifies these problems. In three parts--'the day of' an information attack, 'the day after,' and finally 'the day before'--participants can work their way through the decisionmaking problems of information warfare. The exercise, which has been tested with many government and private groups, is a brilliant device for exploring a problem bound to become more salient." (Foreign Affairs)

"An excellent overview of the subject. . . . Highly recommended for a variety of subject areas, particularly political science and computer science." (Academic Library Book Review) "The great value of such exercises lies in raising the consciousness of decision-makers about problems likely to emerge, but which have not yet received their devoted attention." (Comparative Strategy)

"This book terrified me . . . because the authors are right. Strategic information warfare is possible and probable. I applaud that this research was done. I am thrilled that this is an unclassified, easily obtained book rather than something that remains within the closed networks of the military-industrial vaults." (Computing Reviews)

This book discusses the potential vulnerability of the U.S. defense and civilian information infrastructure.