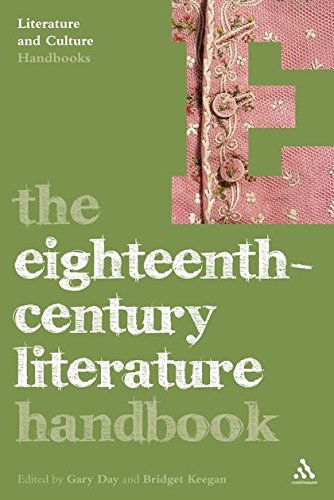 "Here is a warm welcome for any student encountering eighteenth-century literature for the first time. This lively and practical handbook opens the door on a wealth of materials to engage them and set them thinking for themselves. The range of critical approaches and the mix of context and analysis make for a volume that introduces rather than packages."
- Professor David Fairer, University of Leeds, UK

"For undergraduate students, Day and Keegan introduce British literature and culture in the eighteenth century. In the ten chapters, which follow a progressive learning strategy rather than a chronological discussion, a group of English, literature, and history scholars from the UK and US discuss authors, texts, and historical and cultural contexts, including Samuel Johnson and Jonathan Swift; key critics, concepts, and topics, such as aesthetics, criticism, feminism, the novel, Romanticism, and satire; gender, sexuality, and ethnicity; major critical approaches, changes in the canon, and directions for research; and case studies in reading literary and theoretical and critical texts." -Eithne O'Leyne, BOOK NEWS, Inc.

"An innovative as well as a practical and level-headed guidebook, written by engaged and experienced scholars and teachers, which sets out for students at university level some of the central concepts, contexts and approaches, and gives a sense of the variety, challenge and excitement to be found in the study of British literature of the long eighteenth century."
- Marcus Walsh, Kenneth Allott Professor of English Literature, University of Liverpool, UK

This book presents a comprehensive, accessible and lucid coverage of Eighteenth-Century English literature, major issues and key figures, edited and written by well-established academics in clear, jargon-free language. "The Eighteenth-Century Literature Handbook" is an invaluable introduction to literature and culture in the eighteenth century. It provides a one-stop resource for students with the essential information and guidance needed from the beginning of a course through to developing more advanced knowledge and skills. It includes: introductions to authors, texts and contexts; guides to key critics, concepts and topics; an overview of major critical approaches, changes in the canon and directions of current and future research; case studies in reading literary and theoretical and critical texts; and, annotated further reading (including websites), timeline, glossary of critical terms.Written in clear language by leading academics, it is an indispensable starting point for anyone beginning their study of eighteenth-century literature.

"Literature and Culture Handbooks" are an innovative series of guides to major periods, topics and authors in British and American literature and culture. Designed to provide a comprehensive, one-stop resource for literature students, each handbook provides the essential information and guidance needed from the beginning of a course through to developing more advanced knowledge and skills.