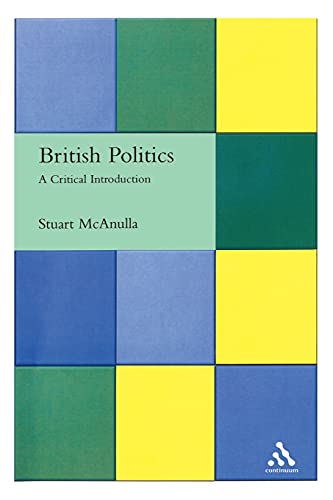 This book provides students with a critical introduction to the British political system and the context of contemporary British policy making. Too often the importance of interpretation, to any understanding of British politics is neglected. Attention to conveying factual information takes precedence over developing theoretical understandings.

'British Politics: A Critical Introduction is a well-argued book which makes a refreshing change from the rather weighty multi-authored textbooks which tend to confront today's undergraduates.' - John Greenway, Political Studies Review--Sanford Lakoff

McAnulla (politics and international studies, U. of Leeds) offers an account of British politics that is driven by concepts and theories, rather than the events and institutions that drive most such textbooks. He pays particular attention to understanding contemporary developments by appreciating the traditional political dynamics. Annotation 2007

Book Description Continuum, 2020. Paperback. Condition: NEW. 9780826461568 This listing is a new book, a title currently in-print which we order directly and immediately from the publisher. Print on Demand title, produced to the highest standard, and there would be a delay in dispatch of around 10 working days. For all enquiries, please contact Herb Tandree Philosophy Books directly - customer service is our primary goal. Seller Inventory # HTANDREE092557