Items related to Melanie Klein: Her Work in Context

Melanie Klein: Her Work in Context 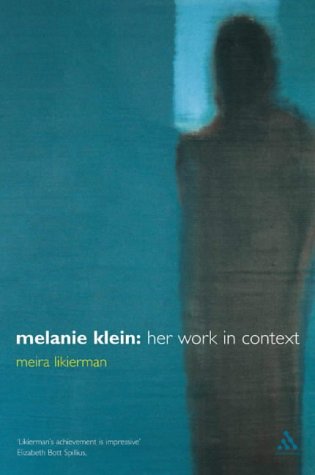 Melanie Klein remains one of the most important and influential figures in psychoanalysis. Klein pioneered the analysis of children and applied her insights on the infantile origins of unconscious drives to adult analysis.Meira Likierman's study is the best available introduction to Melanie Klein's thought and work.

"Klein has been quoted but she has never, until Likierman's book been properly read. This book reveals with patient lucidity just what is fascinating about Klein as a psychoanalytic theorist. It recovers her work, in other words, from the sentimentality and moralism in which her so-called followers have buried her. Likierman's Klein is a Klein for a new generation of readers." ---Adam Phillips, author of On Kissing, Tickling and Being Bored

"A useful corrective. Likierman's volume is an intellectual biography, more balanced than Phyllis Grosskurth's....For the most part chronologically organized, it describes Klein's ideas in an integrated, coherent way, using the intellectual context of Klein's works to elucidate meaning otherwise painstakingly rendered from the originals." --Choice, November 2001

Melanie Klein was probably the most controversial and influential figure that has yet appeared on the British psychoanalytic scene. She left Germany in 1926 and settled in London where she soon quarrelled with Anna Freud. Klein pioneered the psychoanalysis of children and applied her insights on the infantile origins of unconscious drives to adult analysis. Her relationship with her own children was highly troubled. In this critical yet sympathetic book Meira Likierman of the Tavistock clinic assesses the work, life and lasting influence of this brilliant figure.

1. Melanie Klein: Her Work in Context

Book Description Continuum, 2020. Paperback. Condition: NEW. 9780826457707 This listing is a new book, a title currently in-print which we order directly and immediately from the publisher. Print on Demand title, produced to the highest standard, and there would be a delay in dispatch of around 10 working days. For all enquiries, please contact Herb Tandree Philosophy Books directly - customer service is our primary goal. Seller Inventory # HTANDREE093926

6. Melanie Klein: Her Work in Context (Paperback or Softback)

7. Melanie Klein: Her Work in Context

10. Melanie Klein: Her Work in Context