Items related to The Calling of a Cuckoo

David Jenkins The Calling of a Cuckoo

The Calling of a Cuckoo 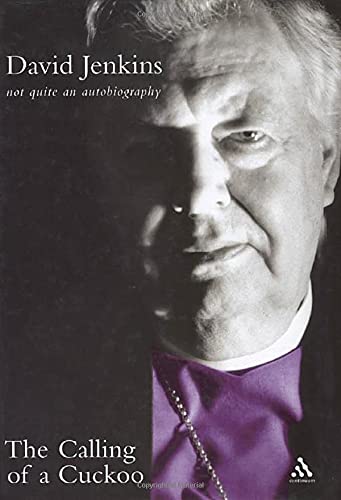 One of England's most controversial church leaders in the 1980s, Jenkins attempts to explain the man behind the notoriety: how he came to his beliefs, and how that continuing and deepening faith in God carried him through the height of the controversies and remains with him today.

Bishop Jenkins retired form the See of Durham a decade ago, and here at last are some of his reflections on his episcopate, as well as two essays on Christian faith an the ordination of women. Jenkins was so deeply controversial in his time that it is easy to forget that he was, and remains, perhaps the most popular Bishop of Durham since Ian Ramsey. The old voice shines through these pages, and whether one agrees with him, or whether one is critical, as Archbishop George Carey is in his recent memoirs, one again hears the passion with which Jenkins captured the imagination of so many (mostly outside the church) and infuriated the sensibilities, of others (mostly within the church, and within the conservative party). Unapologetically engaged with every aspect of life, Jenkins is always worth reading, and this book is no exception. The Very Rev. Peter Eaton, The Living Church 9/5/04 "This book has, for me, drawn together thoughts of encouragement. " -Father Patrick, Monos magazine

In February 1984, David Jenkins received an invitation from then Prime Minister Margaret Thatcher, to become Bishop of Durham. His tenancy of the See was to become one of the most controversial in its history. He hit the headlines as the "unbelieving bishop" after his expositions of the Virgin Birth and the Resurrection. When York Minster was struck by lightning days after his consecration, his notoriety was assured. Now in retirement, he attempts to explain the man behind the controversy: how he came to his beliefs, why he became known as "a cuckoo in the establishment's nest", and how that continuing and deepening faith in God carried him through the height of the controversies and remains with him today.

1. The Calling of a Cuckoo: Not Quite an Autobiography

2. The Calling of a Cuckoo: Not Quite an Autobiography Jenkins, David