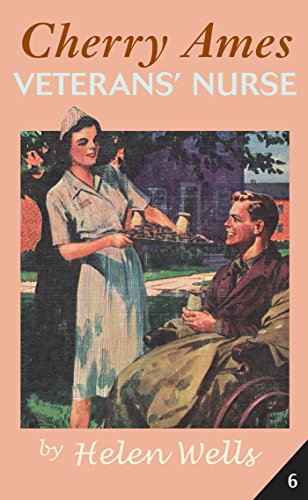 The war is over, and Cherry is sent home. Her new assignment is working in a hospital for veterans, where she finds her biggest challenge is raising the spirits of men who have lost arms, legs, or other body parts. Will they be welcomed back to their families and be able to work again? Jim Travers, the woodworker who has lost a leg and was the sole support of his elderly mother, isn't convinced.

<p><b>Helen Wells, </b>was a social worker turned full-time writer, and, like her most famous heroine, an Illinois native who loved New York City.</p> <p>She was born Helen Weinstock on March 29, 1910, in Danville, Illinois. Her brother, Robert, has said that ""Danville is pretty much the town that Cherry Ames lived in, and our house was her house."" The family moved to New York City when Helen was about seven, and she loved New York. The family retained ties to Danville, however; almost every summer, they spent some time visiting relatives there. As a teenager, Wells studied painting at the Art Students League in New York City; she also studied music. At New York University, she became the first female editor of the school's literary quarterly. She graduated from NYU in 1934, with a major in philosophy and a minor in sociology and psychology. After graduation, she worked for a time as a social worker and began to write for magazines, and eventually turned to writing full-time after winning prizes in two short-story contests.</p> <p>During World War II, she served as a volunteer with the State Department's Office of the Coordinator of Inter-American Affairs, escorting Latin American visitors in the United States. She traveled widely, visiting Brazil, Spain, France, Austria, Israel, Mexico, England, and several other countries. Among her other interests were reading, theater, ballet, and jazz. She also was a cat lover; two of her cats were Gigi, a blue Persian, and Crissy, an orange Angora. She was active in several author organizations, especially the Mystery Writers of America, and taught writing courses at the Institute of Children's Literature in Redding Ridge, Connecticut. </p> <p>Helen Wells is best known for the Cherry Ames series, which was published in numerous countries besides the United States, including Canada, Great Britain, Norway, Sweden, Denmark, Finland, Iceland, Japan, France, Italy, Holland, and Bolivia. But Wells wrote two other series. Under her own name, she wrote the Vicki Barr books, about a young mystery-solving flight attendant--like Cherry Ames and Helen Wells herself, another Illinois-to-New York transplant. And, as Francine Lewis, she penned the short-lived Polly French series, published by Whitman in the early 1950s: <i>Polly French of Whitford High</i>, <i>Polly French Takes Charge</i>, and <i>Polly French and the Surprising Stranger</i>; these books, about a young teenager, are aimed at a younger readership.</p> <p>Among her other books for young people were several so-called Career-Romances for Young Moderns--novels that featured a young woman pursuing a career, published by Julian Messner: <i>The Girl in the White Coat</i> (1953), <i>A Flair for People </i>(1955), <i>Introducing Patti Lewis, Home Economist</i> (1956), and <i>Doctor Betty</i> (1969). Wells also wrote <i>Escape by Night: A Story of the Underground Railway</i> (1953), a ""Winston Adventure Book"" for young people, based on a true story; and <i>A City for Jean</i> (1956), a novel about a young social worker, for Funk & Wagnalls; and <i>Adam Gimbel, Pioneer Trader</i> (1955) and <i>Barnum, Showman of America</i> (1957) for McKay.</p> <p>Helen Wells died in New York City on February 10, 1986, and is buried in Danville, Illinois. The 1986 Juvenile Series Writers Conference in Corning, New York, was dedicated to her memory.</p> <p>Springer Publishing Company is grateful to <i>The Cherry Ames Page</i> website for information on Helen Wells. Please visit <a href=http://www.netwrx1.com/CherryAmes target=_new><b> www.netwrx1.com/CherryAmes</b></a></p>

The war is over, and Cherry is sent home. Her new assignment is working in a veteran's hospital, where she finds her biggest challenge in raising the spirits of men who have lost arms, legs, or other body parts. Will they be welcomed back to their families and able to work again? Jim Travers, the woodworker who has lost a leg and was the sole support of his elderly mother, isn't convinced. But he finds he is of critical assistance to Cherry as she tracks the mysterious thief who has robbed the Veteran's Centeer of a medicine that can help a small boy recover from a deadly disease. "