Items related to A History of Indian Buddhism: From Sakyamuni to Nagarjuna...

A History of Indian Buddhism: From Sakyamuni to Nagarjuna (Asian studies at Hawaii) 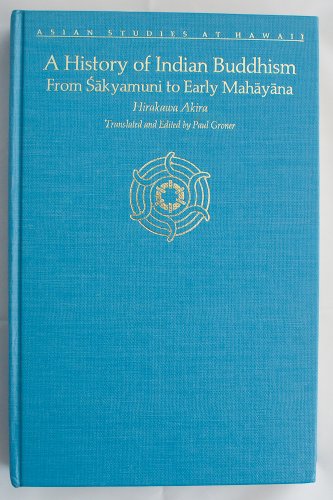 This comprehensive and detailed survey of the first six centuries of Indian Buddhism sums up the results of a lifetime of research and reflection by one of Japan's most renowned scholars of Buddhism. Relying on Pali and Sanskrit sources and on inscriptions from archaeological sites and Chinese translations of Indian texts, Hirakawa balances his review of early Buddhist doctrinal development with extensive discussion of historical background and the evolution of Buddhist institutions. The inclusion of Japanese and Western language bibliographies together with an extensive bibliographic essay by the translator should make this volume especially useful as an introduction to a large corpus of Japanese scholarship on Buddhism which is still not widely known in the West.

Hirakawa Akira (b. 1915), is Professor Emeritus of Indian Philosophy at Tokyo University. He has also taught at Waseda, Komazawa, and Tohoku universities. In 1983, he was elected President of the Japanese Association of Indian and Buddhist Studies, the most important academic organization for Buddhist studies in Japan. Hirakawa is the author or editor of over twenty books on Buddhism and has written more than 240 scholarly articles and reviews on Indian Buddhism.. He is widely recognized as one of the most eminent scholars of Indian Buddhism in Japan today. Paul Groner received his Ph. D. from Yale University and is currently Associate Professor at the University of Virginia.

A HISTORY OF INDIAN BUDDHISM: FR