Items related to The Last Empire: Nationality and the Soviet Future... 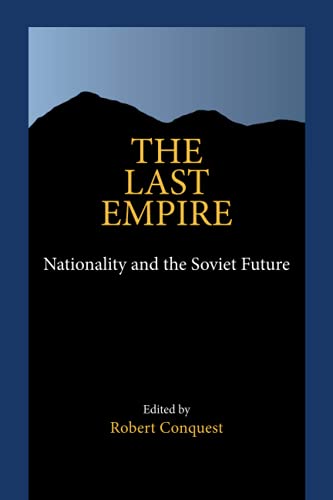 The historical background, the present position, and the future prospects of both the non-Russian and Russian peoples are considered in their many aspects, as are the maneuvers of the Communist regime to suppress, appease, or make use of them. The future of the Soviet Union, and thus of the world, depends greatly on whether, and how, the Communist leadership, whose own ideology has lost most of its appeal, can adjust to a new surge of national feeling. The authors examine the question from many points of view, in a broad conspectus of political, cultural, economic, demographic, and other approaches.

Robert Conquest passed away on August 3, 2015. He was a research fellow at the Hoover Institution. His awards and honors include the Jefferson Lectureship, the highest honor bestowed by the federal government for achievement in the humanities (1993), the Presidential Medal of Freedom (2005), the Dan David Prize (2012), Poland's Commander's Cross of the Order of Merit (2009), Estonia's Cross of Terra Mariana (2008), and the Ukrainian Order of Yaroslav Mudryi (2005). He was the author of twenty-one books on Soviet history, politics, and international affairs, including the classic The Great Terror-which has been translated into twenty languages-and the acclaimed Harvest of Sorrow (1986). His most recent works are Reflections on a Ravaged Century (1999) and The Dragons of Expectation (2005).

Buy Used
Condition: As New
Dispatched from UK bookshop within... Learn more about this copy