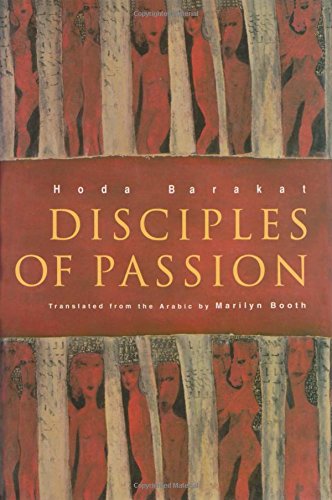 Disciples of Passion chronicles the civil war in Lebanon through the troubled and sometimes quasi-hallucinatory mind of a young man who has experienced kidnapping, hostage exchange, and hospital internment. As he recalls his village childhood and recounts his relationship with a woman of a different faith, his fragmented narrative probes the uncertainties of political testimonial and ascriptions of responsibility in wartime. Marilyn Booth's fluid translation brings to an English audience one of the Arabic language's finest contemporary novelists. Widely celebrated in France, where she currently lives in exile (from Lebanon), Hoda Barakat writes from personal experience: her novels focus on the civil war in Lebanon and how it shaped the lives of people marginalized by the conflict. Compelling scenarios of war and its aftermath of suffering and destruction are integrated into subtle psychological portraits - with protagonists often propelled into unexpected action.

"In this brief, enigmatic novel by award-winning Lebanese author Barakat (The Tiller of Waters; The Stone of Laughter), an unnamed Christian narrator tells of his relationship with a Muslim woman during Lebanon's civil war. It's a fragmentary cri de coeur told in retrospect from the confines of a Church-run insane asylum with the menace of war still very present. ... The novel's impassioned, poetic prose (superbly translated from the Arabic by Marilyn Booth) teems with strange visions, religious diction and imagery, and drifts into discursive riffs on the impossibility of knowing the 'other.'"

Hoda Barakat has received critical acclaim in the Arab world and abroad. Three of her books have been translated into French, and she was awarded the Naguib Mahfouz Prizefor her novel, The Tiller of Waters, and the Al-Nagid Award for The Stone of Laughter. Marilyn Booth is associate professor of comparative literature at the University of Illinois at Urbana-Champaign.