Items related to No Priest but Love: Excerpts from the Diaries of Anne... 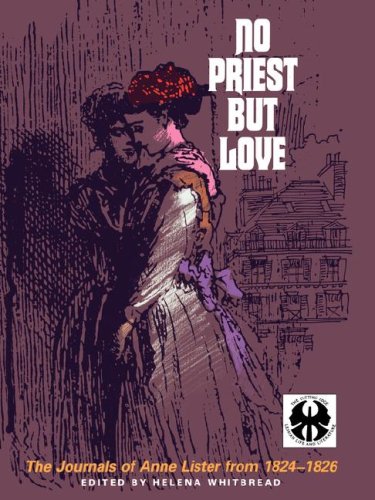 "An interesting historical record, edited with great sensitivity . . . . [Lister] reveals her lesbian affairs with remarkable honesty, offering a rare insight into the mores of the time."
—Sunday Independent

"As a document of one woman's revolt against convention and as a celebration of love between women, this is an uplifting book."
—The Independent

Upon publication, the first volume of Anne Lister's diaries, I Know My Own Heart, met with celebration, delight, and some skepticism. How could an upper class Englishwoman, in the first half of the nineteenth century, fulfill her emotional and sexual needs when her sexual orientation was toward other women? How did an aristocratic lesbian manage to balance sexual fulfillment with social acceptability?

Helena Whitbread, the editor of these diaries, here allows us an inside look at the long-running love affair between Anne Lister and Marianna Lawton, an affair complicated by Anne's infatuation with Maria Barlow. Anne travels to Paris where she discovers a new love interest that conflicts with her developing social aspirations. For the first time, she begins to question the nature of her identity and the various roles female lovers may play in the life of a gentrywoman. Though unequipped with a lesbian vocabulary with which to describe her erotic life, her emotional conflicts are contemporary enough to speak to us all.

This book will satisfy the curiosity of the many who became acquainted with Lister through I Know My Own Heart and are eager to learn more about her revealing life and what it suggests about the history of sexuality.

"Michelle Brown's book (2009) offers an insightful application of Foucauldian insights (from, e.g. 1975/1995) to the nature of disciplinary power in America. The book should be praised as much for its theoretical insights as for its applicability; the author considers contemporary media, the War on Terror, and other current trends in American Punishment. The result is a book that seamlessly unites theoretical analysis and informed discussion of these facts in a way that not only diagnoses problems with this system, but also suggest solutions to these problems."-Metapsychology Online Reviews,

"A deeply insightful and profoundly disturbing dissection of the culture of American penality."
-David F. Greenberg, author of "Crime and Capitalism"

"In this important challenge to dominant sociological and cultural understandings of punishment, Brown analyzes the construction of popular ideas about punishment, especially incarceration. Demonstrating that ordinary citizens play a central role in the construction and distribution of pain, she shows how mass imprisonment damages society and, ultimately, the practice of democracy. Brown's passionate discussion of penality beyond prison walls pushes us to rethink traditional concepts of responsibility, and it opens up a way to escape from America's dysfunctional prison policies."
-Nicole Rafter, author of "The Criminal Brain"

Book Description Paperback. Condition: Good. Minimal highlighting and underlining. Book shows common (average) signs of wear and use. Binding is still tight. Covers are intact but may be repaired. We have 500,000 books to choose from -- Ship within 24 hours -- Satisfaction Guaranteed!. Seller Inventory # mon0000827378

Book Description Condition: Good. A+ Customer service! Satisfaction Guaranteed! Book is in Used-Good condition. Pages and cover are clean and intact. Used items may not include supplementary materials such as CDs or access codes. May show signs of minor shelf wear and contain limited notes and highlighting. Seller Inventory # 081475077X-2-4

No Priest But Love: The Journals of Anne Lister from 1824-1826 (The Cutting Edge: Lesbian Life and Literature Series)