Items related to The Government And Politics Of The Middle East And...

Long, David The Government And Politics Of The Middle East And North Africa: Third Edition

The Government And Politics Of The Middle East And North Africa: Third Edition 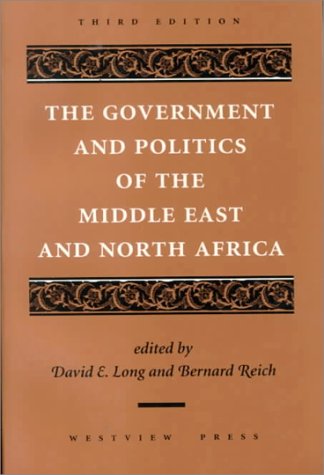 Rapid social, economic, and political change is endemic to the Middle East and is often more revolutionary than evolutionary in nature. In many ways, the entire political landscape of the Middle East has been transformed in the past decade in the realm of both international relations and domestic politics: The collapse of the Soviet Union, the end of the cold war, and the Iraqi invasion of Kuwait have all had a profound effect on relations among states within the region and between those states and countries outside the region.In this revised edition, Long and Reich provide comprehensive and up-to-date analyses of many critical contemporary events and issues. The contributors explain how Desert Storm isolated Iraq and brought Syria back into the mainstream of Arab politics, contributing to the revival of the Arab-Israeli peace process. They also show how the return of a Labor government in Israel has allowed the peace process to go forward. Evaluating the economic costs of the Kuwait war and the continuing oil glut, the authors find that resulting changes in the domestic economies of the oil-producing states have created additional pressures for social and political change. The most profound change in government and politics, however, is the rise of Islam as the idiom of political discourse among moderates as well as extremists.

"The book as a whole is an excellent summing up of the politics of the Middle East... one which serves as an introduction to the beginner and as a reference and point of departure for the specialist." Middle East Journal"

David E. Long is a consultant on the Middle East and counterterrorism. He is retired from the U.S. Foreign Service and has taught and lectured extensively on Middle Eastern subjects. He is the author of The United States and Saudi Arabia: Ambivalent Allies (Westview, 1985) and The Anatomy of Terrorism (1990). Bernard Reichis Professor of Political Science and International Affairs at George Washington University in Washington, DC. He is a member of the Board of Advisory Editors of the Middle East Journal and of the International Editorial Board of Israel Affairs . He is the author of Quest for Peace: United States-Israel Relations and the Arab-Israeli Conflict, The United States and Israel: Influence in the Special Relationship, Israel: Land of Tradition and Conflict, Historical Dictionary of Israel, Securing the Covenant: United States-Israel Relations After the Cold War, Arab-Israeli Conflict and Conciliation: A Documentary History, and of Political Dictionary of Israel as well as the author of numerous articles, book chapters and monographs on Middle East politics, international politics, and United States foreign policy. Bernard Reich is professor of political science and international affairs at George Washington University in Washington, D.C. Gershon R. Kieval is senior analyst at the Central Intelligence Agency and adjunct professor at George Washington University.

1. The Government And Politics Of The Middle East And North Africa: Third Edition Long, David