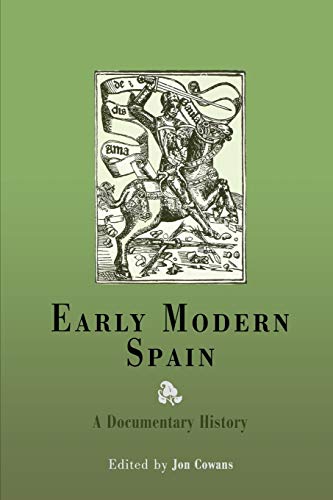 'It is difficult to think of a better way of introducing students to the rich diversity of Hispanic civilization in the Golden Age and Enlightenment than through the pages of this book.'-History

"It is difficult to think of a better way of introducing students to the rich diversity of Hispanic civilization in the Golden Age and Enlightenment than through the pages of this book."—History

"Immediately useful to anyone interested in Spanish history and culture."—Virginia Quarterly Review

Jon Cowans is Associate Professor of History at Rutgers University, Newark. He is the editor of the companion volume Modern Spain: A Documentary History, also available from the University of Pennsylvania Press.

Book Description University of Pennsylvania Press, United States, 2003. Paperback. Condition: New. Language: English. Brand new Book. Spain as a political entity can be traced to the joining of the two largest Iberian kingdoms through the marriage of Ferdinand of Aragon and Isabella of Castile in 1469. Over the course of the next centuries, Spain rose to European dominance, presided over the world's largest empire, and saw its power and wealth decline until it was finally conquered and occupied by Napoleon in the early nineteenth century. Early Modern Spain: A Documentary History, the first broad-ranging collection in English of writings from the entire period from 1469 to the end of the eighteenth century, comprises 61 documents carefully selected and introduced by Jon Cowans.Beginning with the marriage contract of Ferdinand and Isabella, the volume unveils the rich and turbulent history of early modern Spain through contemporary writings, including documents on the expulsion of the Jews in 1492, a narrative of the conquest of Mexico, accounts of the Inquisition, a profile of King Philip II, a cleric's primer on "the perfect wife," a sermon on the defeat of the "Invincible Armada" in 1588, reports of a bread riot in Seville, a royal investigation of the painter Velazquez, Benito Feijoo's "defense of women" of 1737, a 1790 denunciation of bullfighting, and Charles IV's declaration of war on revolutionary France in 1793.Covering political, cultural, social, and economic history, Early Modern Spain: A Documentary History provides a valuable opportunity to explore the history of Spain through primary sources, revealing the problems and experiences of Spain's empire, tensions among ethnic groups and across regions, the place of women and minorities in Spanish society, and the outlooks and roles of Spanish artists. Seller Inventory # AAJ9780812218459

Book Description University of Pennsylvania Press. Paperback / softback. Condition: New. New copy - Usually dispatched within 4 working days. "It is difficult to think of a better way of introducing students to the rich diversity of Hispanic civilization in the Golden Age and Enlightenment than through the pages of this book."-History. Seller Inventory # B9780812218459