Items related to Devils in Daylight 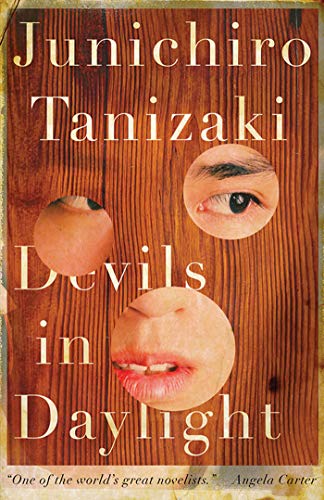 A rumination about the nature of fiction itself.

It is no bad thing to be reminded from time to time that Jun'ichiro Tanizaki's remarkably fresh and intimate voice is speaking to us across a gulf of years and cultures.--Edmund Gordon"They Couldn't Cover Up" (08/18/2017)

The outstanding Japanese novelist of this century.--Edmund White

An absorbing read...quite likely you'll gulp it all down in a single sitting.--Tony Malone

Tanizaki was a great writer. He understood the fetish-making fecundity of love, and the satisfactions it offers even while giving pain, and its perverse, inverse accountings.--John Updike

Tanizaki laminates a murder mystery and psychological study onto a rumination about the nature of fiction itself.--Devils in Daylight

Tanizaki is one of my favorites. His books are about love and very often perverse aspects of love.--Henry Miller

Devils in Daylight, from 1918, reads like a breathless snuff film cowritten by Poe and Simenon.--Pico Iyer

Author of The Makioka Sisters, In Praise of Shadows, and A Cat, a Man, and Two Women, Junichiro Tanizaki (1886-1965) is arguably the greatest Japanese writer of the twentieth century.

J. Keith Vincent is professor of Japanese and comparative literature at Boston University, and his translation of Okamoto Kanoko's A Riot of Goldfish won the Japan-U.S. Friendship Commission Prize for the Translation of Japanese Literature.

3. Devils in Daylight (Paperback or Softback)

Book Description Condition: New. Shipping may be from multiple locations in the US or from the UK, depending on stock availability. 96 pages. 0.114. Seller Inventory # 9780811228756