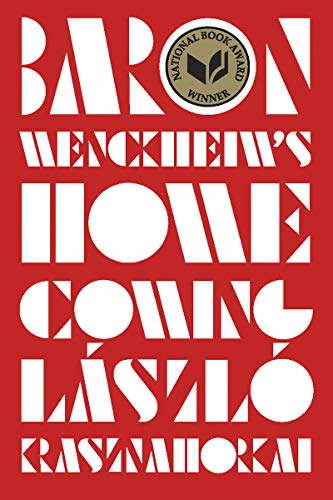 At last, the capstone to Krasznahorkai's four-part masterwork

A vision of painstaking beauty.

One of the most mysterious artists now at work.--Colm Tóibín

His works tends to get passed around like rare currency. One of the most profoundly unsettling experiences I have had as a reader.--James Wood "The New Yorker "

The Hungarian master of the apocalypse.--Susan Sontag

The baron cuts a memorable figure, but the real star of Krasznahorkai's story is a philosopher who has cut himself off from society and lives in hermitage in a forest park, concerned with problems of being and nonbeing. In the end, the worlds the philosopher, the baron, and other characters inhabit are slated to disappear in a wall of flame.-- (07/01/2019)

If you're a fan of Krasznahorkai, you already know that you need to read this one: the final volume in his four-part series, in which the aging Baron Bela Wenckheim proceeds home to Hungary, to the highly absurd town of his birth.--Emily Temple "Lit Hub's Most Anticipated Books of 2019 "

Krasznahorkai establishes his own rules and rides a wave of exhilarating energy in this sprawling, nonpareil novel, which harkens back to early works such as Satantango but with the benefit of the Man Booker International Prize winner's mature powers. In a small Hungarian town, an eccentric and isolated genius known only as the Professor occupies a specially designed hut, ravaged by uncontrollable thoughts and trying to rid himself of "human imbecility" while keeping unsavory watch on his daughter. There will soon be more to watch: the ruined Baron Bela Wenckheim is returning home by train, in flight from his extensive gambling debts, only to fall in with a colorful collection of locals, all looking to take advantage of the Baron by one means or another. There's the roughneck regulars of the local pub, the scheming town mayor looking to gin up excitement over the Baron's return for his own visibility, and the con man Dante of Szolnok, whom the Baron encounters casually only to find he has his fingers in any pie from which he can extract a profit. The one bright spot in this Greek chorus of rogues is Marika, the Baron's childhood sweetheart, whose romantic desires to reunite with the refined boy she remembers will be tested by corrosive new realities. This vortex of a novel compares neatly with Dostoevsky and shows Krasznahorkai at the absolute summit of his decades-long project. Apocalyptic, visionary, and mad, it flies off the page and stays lodged intractably wherever it lands.-- (06/20/2019)

László Krasznahorkai, described by James Wood in The New Yorker as an "obsessive, visionary," was born in Gyula, Hungary. He is the winner of the 2015 Man Booker International Prize and was nominated again in 2018.

Ottilie Mulzet is a literary critic and translator of Hungarian. Mulzet received the Best Translated Book Award in 2014 for her translation of Krasznahorkai's Seiobo There Below.