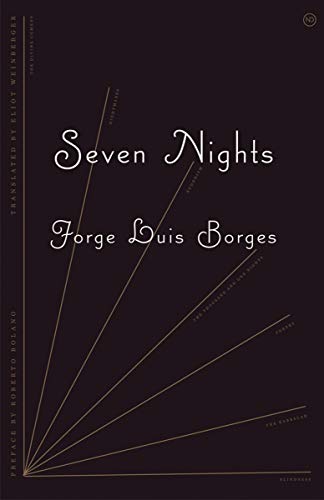 The incomparable Borges delivered these seven lectures in Buenos Aires in 1977; attendees were treated to Borges erudition on the following topics: Dante s The Divine Comedy, Nightmares, Thousand and One Dreams, Buddhism, Poetry, The Kabbalah, and Blindness."

Eliot Weinberger is an essayist, editor, and translator. He lives in New York City.

Book Description New Directions, 2009. Paperback. Condition: New. FREE delivery upgrade - If you live in the USA this item will arrive in 4 to 6 business days when you choose the lowest cost shipping method when checking out. Excellent condition. Interior is tight, bright and clean; no underlining, notes or highlighting. Binding is smooth and solid. Paperback cover is clean and sticker free. 100% Satisfaction Guaranteed. All items are carefully enclosed with bubble wrap. We ship promptly and worldwide via US Post and will email you a tracking number. Seller Inventory # SKU0044840

Book Description Paperback. Condition: New. 2nd. Paperback. The incomparable Borges delivered these seven lectures in Buenos Aires in 1977; attendees were treated to Borges' erudition on the following topics: Dante's The Divine Comedy, Ni.Shipping may be from multiple locations in the US or from the UK, depending on stock availability. 128 pages. 0.127. Seller Inventory # 9780811218382