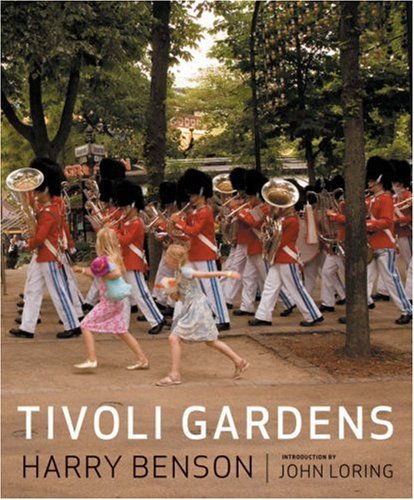 Tivoli Gardens is one of the world's most spectacular and popular amusement parks. Comprised of a lush public garden, theme park, shopping area, and performing arts centre, Tivoli has captured the hearts and imaginations of people around the world, attracting a reported 30,000 visitors a month and drawing at least one million visitors to their annual Christmas light shows and performances. An introduction by John Loring traces Tivoli's development as an entertainment centre and popular gathering place since it first opened in 1843, and highlights the attractions visitors can expect to find today. Complementing the text and forming the bulk of the book are stunning photographs of the park environs and its visitors taken by world-renowned photographer, Harry Benson, in four trips in different seasons. "Tivoli Gardens" captures the spirit and energy of this magical place throughout the year.

Harry Benson was twice named magazine photographer of the year by the National Press Photographers' Association and was twice the recipient of the Leica Medal of Excellence. John Loring, design director of Tiffany & Co. since 1979, is the author of Abrams' Tiffany Diamonds, Greetings from Andy: Christmas at Tiffany's, Timepieces, Tiffany in Fashion, Tiffany Flora & Fauna and numerous other books on Tiffany style and entertaining. Prior to joining Tiffany, Loring served as the New York bureau chief of Architectural Digest. He graduated from Yale University and has an honorary Doctor of Fine Arts degree from Pratt Institute. He is on the acquisitions committee of the Department of Prints and Illustrated Books at The Museum of Modern Art, New York. He lives in New York City.