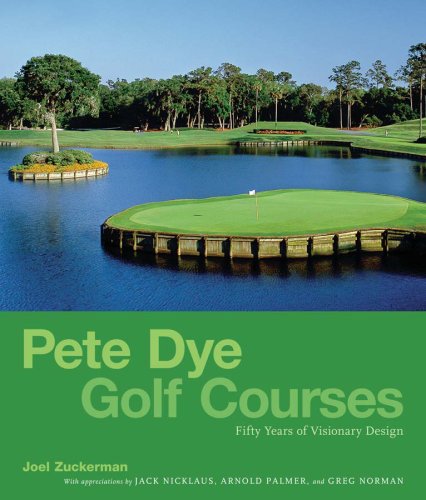 Fiendishly difficult and spectacularly beautiful - Pete Dye's golf courses are among the most exciting in the world. In this volume, 130 were selected to honour his 85th birthday - among them such famous marvels as Teeth of the Dog, PGA West, TPC Sawgrass and Black Wolf Run, but also less well-known ones that will come as a revelation and a lure to golfers everywhere. Pete's wife, Alice, has been his collaborator almost from the beginning. His sons, P.B. and Perry, as well as his niece and three nephews, have followed in his footsteps and are represented here by several courses.Magnificent course photographs, many made especially for this volume by Ken May, Dye's photographer of choice, enhance a witty and irreverent text by golf writer Joel Zuckerman. Tributes by Jack Nicklaus, Arnold Palmer, Tom Doak and Greg Norman introduce each decade of work and highlight Dye's achievements and his place in the pantheon of great golf course architects. Anecdotes by golf pros, clients and associates - often hilarious - help make this a must-read book about one of the most colourful characters in the whole history of the game.

Joel Zuckerman, a.k.a. the Vagabond Golfer, was recently called 'one of the most respected and sought-after golf writers in the Southeast' by Golfer's Guide. He's usually found in either Savannah, Georgia, or Park City, Utah.