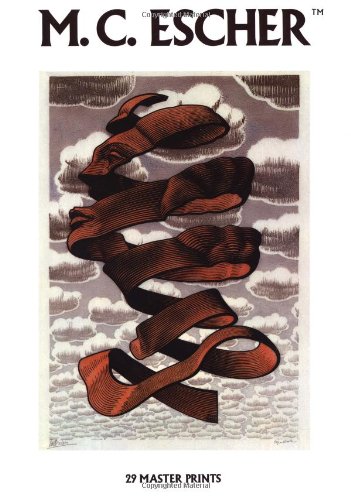 Twenty-nine woodcuts and lithographs make use of optical illusions and unusual perspectives and are accompanied by the artist's comments.

M. C. Escher (Dutch 1898-1972) made relatively realistic art--landscapes, portraits--until his early middle age. Then, increasingly fascinated by the tension between two-dimensional representation and the mind's tenacious three-dimensional perception, he began to create prints and drawings in which realism collides with impossibility. Working alone, with no mathematics background, he produced "symmetry drawings" that graphically represented the phenomena of crystallography and foretold the concept of a fractal universe. He challenged the hegemony of so-called natural laws with renderings of courtyards where up and down lose their meaning; of structures that flout gravity and perspective, of abstract patterns that gradually metamorphose into wriggling, flapping beasts. These wildly ingenious new designs reflected the order and beauty Escher saw in a world that often seemed chaotic. Strangely logical manipulations of space, his works are slyly humorous visually stunning, and rigorously obedient to their own physics and perspectives. Escher's world is best enjoyed if you are willing to see from several viewpoints at once.