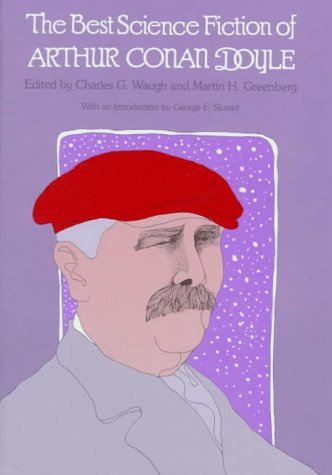 In The Horror of the Heights, aviator Joyce-Armstrong continually asks, And where, pray, is Lt. Myrtle s head? At 43,000 feet, beset by creatures of an air jungle, Joyce-Armstrong, to his immense regret, learns exactly what happened to Myrtle s head. In The American s Tale a quiet Englishman and an American bully tangle. Only one survives, and the cause of death is not human. A crowd of people in The Lift finds itself at the mercy of a fanatic who decides he is an avenging Jehovah. In The Great Brown-Pericord Motor, two inventors devise a wonderful machinebut greed intercedes.Two Sherlock Holmes stories confront crime with Holmes s customary brilliance and Watson s humbling help: The Adventure of the Devil s Foot and The Adventure of the Creeping Man. And two stories involving Professor Challenger who is Sherlock Holmes writ gigantic and outrageous: When the World Screamed and The Disintegration Machine. Challenger is an arrogant genius, but on the side of right.In Through the Veil, a man and his wife face death when they slip from their own time to another, more primitive life. The Los Amigos Fiasco features an attempt by the town of Los Amigos to electrocute the evil Duncan Warner. But the deadly volts come as a wondrous gift to the man the executioners thought they could kill. The Great Keinplatz Experiment tells a droll tale of the chaos that ensues when the spirit of a drunken, irresolute student enters the body of a grave professor and the student receives the spirit of the professor. The Terror of Blue John Gap tells of a blind, brute force loosed upon the world through a tunnel dug by the ancient Romans. The Last Galley shows Carthage s fall to Rome, tells of a seer who predicts that Rome, too, will fall. Danger is an action story warning Britain, showing how Captain Sirius, with the world s smallest navy of submarines, literally starves mighty Britain into submission."

Charles G. Waugh teaches psychology and mass communications at the University of Maine, Augusta.Martin H. Greenberg is the prolific editor of more than 40 science fiction and fantasy books.George E. Slusser is Lecturer in Comparative Literature and Curator of the Eaton Collection at the University of California, Riverside."

Stories tell of time travel, a blockade of Britain, horrible creatures of the air, a mind-switching experiment, and the search for eternal life.